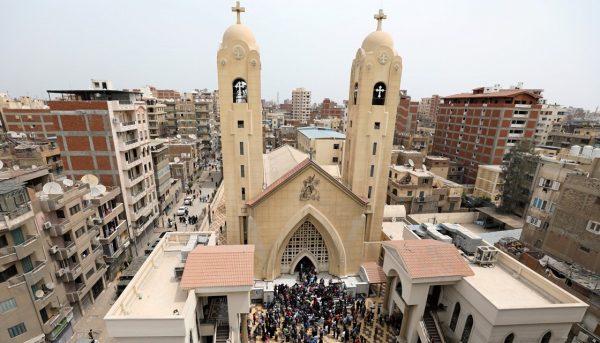 Egyptians gather by a Coptic church that was bombed on Sunday in Tanta, Egypt (Reuters)

At least 43 people have been killed in bomb attacks on two Egyptian Coptic churches on Palm Sunday that included the seat of the Coptic Pope, the latest assault on a religious minority increasingly targeted by Islamist militants.

Islamic State claimed responsibility for the attacks, which also injured more than 100 people and occurred a week before Coptic Easter, with Pope Francis scheduled to visit Egypt later this month.

Egypt’s President Abdel Fattah al-Sisi says a three-month state of emergency will be imposed after the two deadly bombings.

“A series of steps will be taken, most importantly, the announcement of a state of emergency for three months after legal and constitution steps are taken,” Sisi said in a speech aired on state television.

Both attacks happened on Palm Sunday a week before Coptic Easter, with Pope Francis scheduled to visit Egypt later this month.

Sisi has also ordered military troops be deployed across the country.

“President Abdel Fattah al-Sisi the Supreme Commander of the Armed Forces has ordered units from the military to immediately deploy and assist the civilian police in securing vital facilities in all provinces of the republic,” his office said in a statement earlier on Sunday.

Two Islamic State militants wearing suicide vests carried out the deadly church bombings the group said, as it warned of future attacks in a statement.

The first bombing, in Tanta, a Nile Delta city about 100km north of Cairo, tore through the inside of St. George Church during its Palm Sunday service, killing at least 27 people and injuring at least 78, the Ministry of Health said.

The second, carried out a few hours later by a suicide bomber in Alexandria, hit Saint Mark’s Cathedral, the historic seat of the Coptic Pope, killing 17 people, including three police officers, and injuring 48, the ministry added.

Coptic Pope Tawadros, who had attended mass at Saint Mark’s Cathedral, was still in the building at the time of the explosion but was not harmed, the Interior Ministry said.

Islamic State’s branch in Egypt appears to be stepping up attacks and threats against Christians, who comprise about 10 per cent of Egypt’s 90 million people and amount to the biggest Christian minority in the Middle East.

President al-Sisi condemned the attacks and summoned the National Defence Council to an urgent session.

Deflecting Western criticism that he has suppressed political opposition and human rights activists since he won election in 2014, Mr Sisi has sought to present himself as an indispensable bulwark against terrorism in the Middle East, and he identifies militant Islam as an existential threat.

“The attack…will only harden the determination [of the Egyptian people] to move forward on their trajectory to realise security, stability and comprehensive development,” Mr Sisi said in a statement.

Thousands gathered outside the Tanta church shortly after the blast, some weeping and wearing black.

They described a scene of carnage. “There was blood all over the floor and body parts scattered,” said a Christian woman who was inside the church at the time of the attack.

Islamic State’s branch in Egypt appears to be stepping up attacks and threats against Christians, who comprise about 10 percent of Egypt’s 90 million people and amount to the biggest Christian minority in the Middle East.

Though Copts have in the past faced attacks by Muslim neighbours, who have burnt their homes and churches in poor rural areas, the Christian community has felt increasingly insecure since Islamic State spread through Iraq and Syria in 2014 and ruthlessly going after religious minorities.