Source: TASS: Russian News Agency
At least 25 people died and about 50 were injured in a suicide bombing that targeted a cathedral complex in Cairo
Natalya Mihailova | 14 December 2016
CAIRO, December 14. /TASS/. The Islamic State terrorist group, outlawed in Russia, has claimed responsibility for Sunday’s deadly blast in the Egyptican capital Cairo, the Al-Watan newspaper reported, citing a communique published by the terrorists. 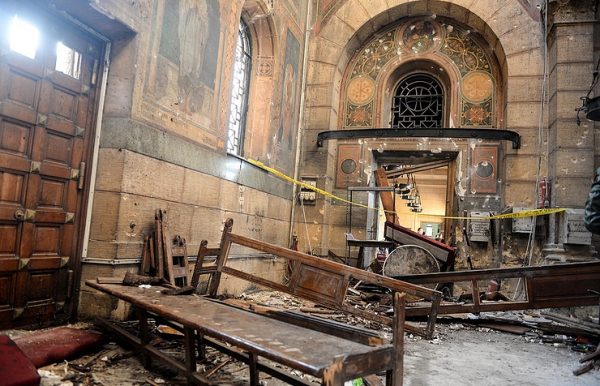 At least 25 people, mostly women and children, died and about 50 were injured Sunday in a suicide bombing that targeted the Saint Mark’s Coptic Orthodox Cathedral in the Abbasiya neighborhood. The blast is being investigated by the state security services.

Earlier in the day, Egyptian President Abdel Fattah al-Sisi identified the suicide bomber as Mahmoud Shafik Mohamed Mostafa, 22. He said that four other people, including one woman, were detained on suspicion of organizing the attack.

Egyptian media reported earlier this week that the suicide bomber was a member of Ansar Bait al-Maqdis, an extremist militant group affiliated with the Islamic state.