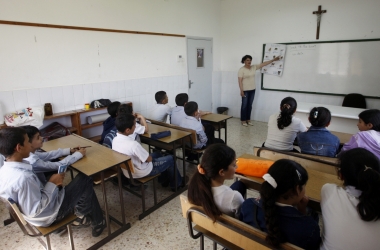 On Wednesday, students, parents and church members converged outside the Israeli Ministry of Education building to denounce Israeli authorities over slashing public funding for Christian schools and forcing them to integrate into Israel’s school system.
Protesters held banners reading “Christian Schools are not for sale” and “Christian Schools ask for equality.”

“We demand equality. Equality between the Christian schools and the Jewish religious schools … as well as the schools that are under the independent title, and take 100 percent of funding,” Botrus Mansour, general director of the Nazareth Baptist school, said.

He added, “We are different from them in the sense that we are doing all our duties toward the curriculum of the Ministry of Education here, and they don’t. We do more than them, but their funds are full and ours are partial.”

Radwan Shehadeh, a father of a student attending a Christian school, said, “The tuition that we pay is a small contribution, but if the Ministry of Education won’t cover its portion, then the tuition will be much higher, so I might reach a point where I pay tens of thousands of shekels per year. That’s why we requested for the Ministry of Education to pay this tuition that we pay for our children.”

Christian schools in Israel are reportedly attended by 30 thousand students, of whom only half are Christians.

This is while a spokesman for the Israeli Ministry of Education said Christian schools cannot receive the same level of public funding as that of Jewish ones, irrespective of their high academic achievements.

“As they (the protesters) claim, regarding the Jewish ultra-Orthodox schools, the reason they get 100 percent funding is the law that was legislated in 1983… All the schools under “the recognized and not official” ruling get 75 percent of funding.”