Jersey, the Island of Thorns and Roses

At last, I had the chance to visit the British Channel Islands. It was a long journey from Cambridge With loads of questions in my mind. Once the plane landed on the Jersey soil, the journey turned into an overwhelming adventure of engaging with the spectrum of human experience.
Minas Monir | 02 September 2011

At last, I had the chance to visit the British Channel Islands. It was a long journey from Cambridge With loads of questions in my mind. Once the plane landed on the Jersey soil, the journey turned into an overwhelming adventure of engaging with the spectrum of human experience.

The Channel Islands are a British Crown dependency. The Britishness of these isles is welded with the French heritage seen in the names of the streets and strong influence of French culture due to the closeness of these islands to the French coast. This marriage of cultures brought forth the Jersey dialect Jèrriais. This language, according to a Jersey woman I met, retreated into the countryside while English is now the main language spoken.

Jersey is a very beautiful island, completely green with warm shores. The Jersey cow is internationally famous for its pure breed, beautiful look, and creamy milk. A German soldier, during the German occupation, reported that he was sent to “the land of milk and honey.” Jersey also reminds you of Russian iconostasis which is famous for Rubliev’s Trinity in its heart. At Jersey’s centre is a town called Trinity, surrounded by areas named after great saints who influenced its ancient history.

You can’t miss the cheerful countryside people and the pleasant scenes around you. If you are a fan of historical discoveries, you will be overwhelmed by the beautiful castles, churches and ancient sites that are well preserved, holding several historical layers in a harmonious way. One of the most striking sites is Fort Isabella Bellissima, a castle built by Sir Walter Raleigh and named after the then Queen Elizabeth I. It witnessed several layers of restorations and fortifications down the centuries. 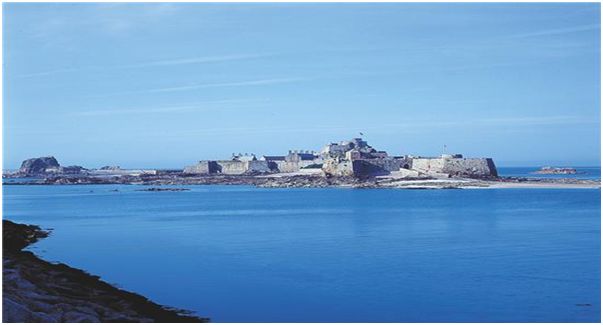 A few meters from the castle, lays the small and quiet hermitage of Saint Helier, the patron of Jersey. According to his hagiography, Helier was a 5th century Belgian monk who was sent as a missionary to Jersey Island. God granted the Jersey people miracles and healings through his prayers. He was martyred at the hands of pagan Vikings attacking the island. Henceforth, he became a symbol of pastoral care and brave resistance in the face of a godless aggressor.

The first time I noticed Helier’s hermitage was from the top of an ugly cement watch tower with a gun machine erected by Nazis over the southern 17th century tower of Elizabeth castle. That was the first human paradox. At the very same place I was standing on there was a soldier, 70 years ago, holding this machine gun to tame the coast named after the holy man who lived inside the quiet and peaceful hermitage just before him centuries ago!

The hermitage of St. Helier, taken from the German watch tower, Elizabeth Castle

In the morning of one of July’s perfect summer days, the Jersey people woke up finding loads of leaflets falling everywhere commanding them to surrender and draw a white cross over important buildings to avoid a heavy bombardment by the Luftwaffe, German air force. King George VI decided to demilitarize the Channel Islands after he discovered that he could not adequately defend them without exhausting the resources of the Kingdom, which was standing alone before the mighty German forces. Jersey and its sister islands were left to their destiny against the German killing machine. Yet they didn’t lose their faith in God or loyalty to the crown. 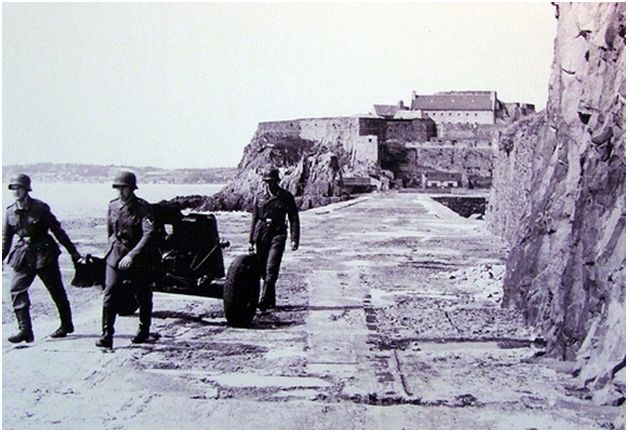 Roy McLaughlin, a BBC war historian, once said “War doesn’t change people, it brings out the best in them – and the worst.” Visiting the place and hearing the stories drew me into the heart of this experience. The Jersey people played their own role in the strategic plan by connecting France with British headquarters. They showed heroic bravery and outstanding skills in assembling wireless devices from simple resources. There was also a blatant human weakness seen in the collaboration of some individuals with the Nazis. 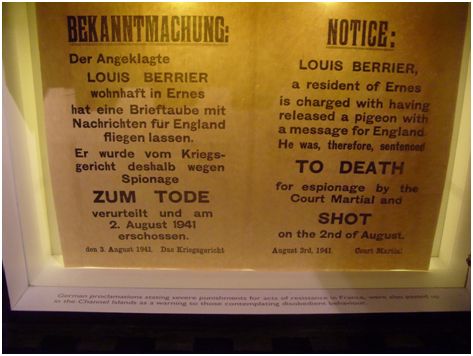 A sign posted by the German forces in Jersey

On the other hand, testimonies of survivors affirm that German soldiers were not like the stereotyped “Mr. Evil” character, but they were human beings who even managed to make friendships with people in Jersey. However, nasty memories of the SS police were unforgettable. The momentum of human misery meeting with sadism and lowliness were embodied in the horrendous attitude of the German police which transformed a complete island, Alderney, into a concentration camp. 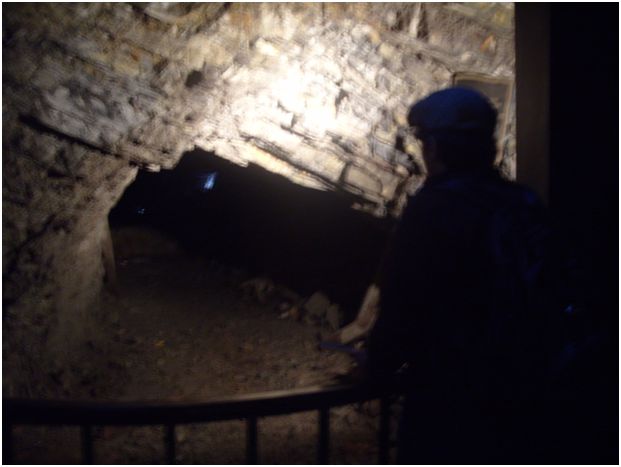 An unfinished tunnel gives you a hint of how ugly, freezing and depressing the conditions of 12 hours daily work the enslaved Russian and eastern European workers have been through

Many Russians and Eastern Europeans were moved there to build the German fortifications. Reports said that out of each 10 Russian workers 4 were died under brutal conditions. I saw myself some of the projects built by the Todt German organization which enslaved nearly 4000 Russians and other nationalities to build horrible and depressing bunkers and tunnels. During my visit to the Jersey War Tunnels, I saw the rooms of German soldiers and how depressing they are; dark and cold. How, then, were the conditions of the enslaved workers? 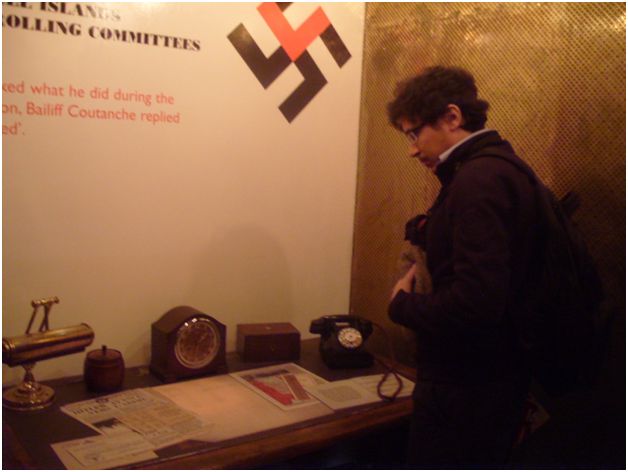 It’s perilous to conjecture what was in the mind of the soldier holding the gun machine in front of St. Helier’s hermitage every day. It would be too judgmental to condemn him just because he was a Third Reich’s soldier. My professor at Harvard Divinity School, Helmut Koester, was a soldier in the German army during the war and he was absolutely the kindest and most noble character I encountered in my short stay in America last year.

Both sides discovered this. For instance, after the end of the war, many German officers who were released from prisons lived through very difficult conditions. Some of these officers who served in Jersey received some financial support from Jersey people to help them to get by.

Jersey was set free on the 9th of May 1945. The great fortifications, which Hitler himself heavily relied on to swallow Britain, and the depressing, dark and freezing tunnels are still there with their cement ugliness that cannot be reconciled with the beauty of the surrounding landscape. In the same way, the details of the human testimonies from the occupation period recorded the most horrific face of wars, and also the most noble feelings that humanity can experience; pride, dignity, honor, hope and forgiveness. This island was called to actualize all these experiences and you are invited to “come and see” (Jn 4:29). 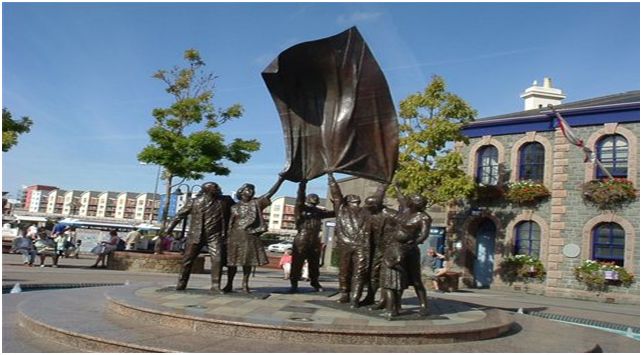 The Statue of Liberation, St. Helier square in Jersey. 9th of May became the national day of Channel Islands

Minas Monir is a UK – based journalist, researcher and writer. The author of several published studies on Theology, he is also an expert on Egyptian affairs and political theology. He is currently an MA candidate at Cambridge Theological Federation and Research assistant at the LSE.