Source: The Middle East Monitor
Natalya Mihailova | 05 September 2014
Archbishop of the Greek Orthodox Church in Jerusalem Atallah Hanna said on Tuesday that the Israeli aggression on Al-Aqsa Mosque is an aggression on both Muslims and Christians, Jordanian newspaper Addustour reported. 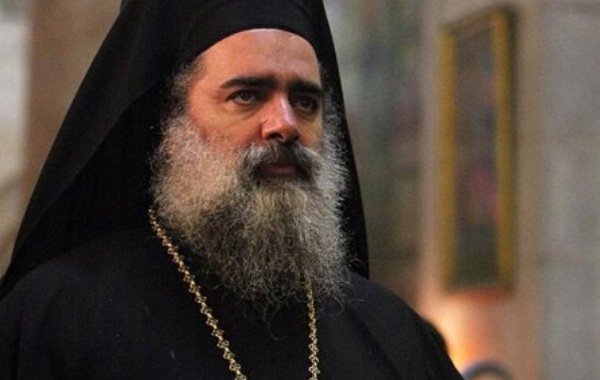 In a recorded speech broadcast during a celebration in Jordan entitled “Resistance is the way to liberate land and return” organised to celebrate Gaza’s “victory”, Atallah said: “It was planned that I be with you here, but the Israeli occupation prevented me.”

The Bishop stressed that the continuous Zionist aggression is targeting “both Muslims and Christians, as well as all formations of the Arab nation.”

Atallah reiterated the importance of solidarity with the Gaza Strip, Amman, Jerusalem and all Arab cities, noting that “all wounds are the same and all suffering is the same as long as the aim is the same.”

Imad Momani, head of Al-Zarqa city where the celebration was held, said that the “Gaza Battle” was a “lesson” for the Zionists. Gaza, which represented the “most wonderful legend in the history”, was a “burial” site for the Zionists.

He hailed the Jordanian staff at the Jordanian Field Hospital which was setup in Gaza at the end of the Israeli assault on the Strip in 2008/2009. He also hailed the King of Jordan who asked for the hospital to be setup.

Momani called on all Jordanians to take the Gazans as an example as to how to fight the “monstrous” Israeli occupation.

“Everybody’s sin is nobody’s sin‚ and everybody’s crime is no crime at all.” This…

Shooting in Kazan – How Did…

"Foma.ru" spoke with the rector of the church dedicated to the Descent…

‘Pray for Peace’: a Plea from…

Most viewed articles
Shooting in Kazan – How Did God Allow Such a Tragedy? A Priest Replies139
The Artos Bread: an Experience of God’s Presence117
“Make It So!” vs. “Let It Be!”108
Metropolitan Onuphry: Being Faithful to Christ Means Fulfilling His Commandments66
‘Pray for Peace’: a Plea from Jerusalem as Violence Continues66
The Eros of Marriage48
ROC Launches 18th “Bus of Mercy” in Omsk46
Most popular authors
Pravmir.com team317
Fr. Gabriel Bilas117
Archpriest Stephen Freeman108
Fr. Vasile Tudora48