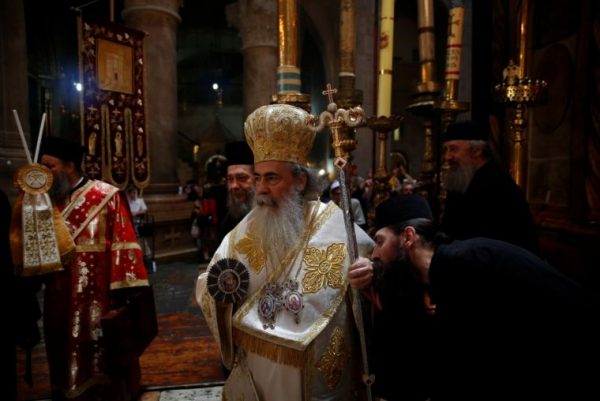 ‘We, the Patriarchs and Heads of Churches in Jerusalem, join together in proclaiming the triumphant victory of our risen Lord and Saviour Jesus Christ from the dead. The message of Easter, which was first announced in Jerusalem, and has echoed down the centuries, now resounds again in Jerusalem, the city of the Resurrection,’ the statement released on Sunday began.

A recent, extensive ecumenical effort saw the restoration of the Holy Aedicule in the Church of the Holy Sepulchre, under which lies what is said to be the original tomb of Jesus Christ. The Greek Orthodox and Armenian Patriarchates of Jerusalem and the Franciscan Custos of the Holy Land, who share the site, had pledged the renovation in a historic moment of unity.

The renovation was celebrated at the end of March. The statement said:

‘The service to celebrate the unveiling of the restored Holy Aedicule was a testimony to our spirit of Ecumenism and a celebration of our unity in Christ. We stood together, as one body, one voice, around the empty tomb. We stood as Christians united in offering hope, perseverance and determination to transform this world under the banner of Christ who conquered all evil through his Resurrection.

‘The sacred history of Jerusalem, and particularly of the Holy Sepulchre, is a constant reminder for the whole world that in this place and at a certain time, the Resurrection was proclaimed for all people and for all time. The Resurrection inspires a resolute steadfastness in the living stones (local Christians) as living witnesses in the Holy Land.’

Unusually the Armenian, Greek Orthodox and Catholic churches all share the same Easter this year, on April 16. The statement reflected on the ‘light of Christ’ that ‘draws the whole human family towards justice, reconciliation and peace, and to pursue it diligently. It draws us all to be unified and to be at harmony with one another. The power and resonance of the Resurrection permeates all suffering, injustice and alienation, bringing forth hope, light and life to all.’

‘Pain, suffering, and death do not have the final word, it is God – who has the first word, and the last. This was the message of the Easter angel, who challenged the first disciples – both women and men – “Why do you look for the living among the dead? [Jesus] is not here, but has risen” (Luke 24:5). Christ is risen. He is risen indeed. Alleluia!’

Egyptian Muslims are granted paid leave to go on the Hajj pilgrimage to Mecca. Now, the High Constitutional…