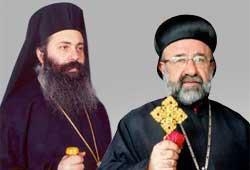 On Thursday morning 25/04/2013, His Beatitude Mor Yohanna X Yazijy the Patiararch of the Greek Orthodox Church of Antioch and All the East has paid a brotherly visit to His Holiness Moran Mor Ignatius Zakka I Iwas Patriarch of the Syriac Orthodox of Antioch and All the East at his residence in Atchane, Lebanon. They have discussed the latest issues related to the two abducted brothers H.E. Mor Paulos Yazijy Greek Orthodox Bishop of Aleppo and Alexandretta and H.E. Mor Gregorios Yohanna Ibrahim Syriac Orthodox Bishop of Aleppo.

They have criticized again the fact that they have not been set free until now despite all the efforts being made. They have reiterated their call for the release of the two captive bishops. They call upon the international community to do all efforts to ensure their release and the stopping of all sort of violence in Syria and for the peace to prevail through dialogue and political means. Also, they agreed about the symbols for the common coexistence, tolerance and national unity. Also, they have agreed about the steps to be taken if the two bishops are not released within the next few hours. They are both hoping that the two abducted bishops will be in their Archdioceses to celebrate Palm Sunday, which will fill us and our people with joy.
Source: The Coptic Orthodox Church UK
Tweet
Donate
Share
Since you are here…