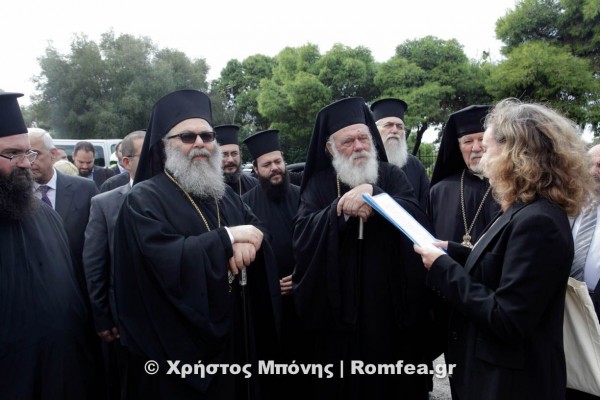 During the visit, His Beatitude was informed by Archbishop Ieronymos II and the members of the Synod of the Church of Greece about the current state of the Greek Church, which is experiencing remarkable growth and a radiant spiritual life. They also examined the suffering of the Greek people, who are suffering from severe economic distress, which is threatening people’s livelihood. His Beatitude and the Antiochian delegation likewise assessed the efforts being undertaken by the Greek Orthodox Church through Apostoliki Diakonia to serve the needy, anoint the wounds of the suffering, and console the sorrowing. They prayed for its leaders and benefactors, that God may grant them further grace and blessings and strengthen them in the service of Jesus’ little brothers. Their Beatitudes then prayed that God may strengthen the Greek people to get through this crisis and to continue to have the generosity and honor that have distinguished them throughout history.

While he attended an extraordinary session of the Synod of the Church of Greece, His Beatitude and the accompanying delegation examined with their brothers how to make shared cooperation between the two sister churches effective at the pastoral, theological and social levels. They assessed the ongoing cooperation that exists between their two churches on the one hand, and between the Church of Antioch and the Greek state on the other hand, by exchanging common experiences at the level of theological studies. They expressed their aspiration for ongoing cooperation in the scholarly and cultural fields and in the field of Greek language instruction, a a common Orthodox witness in today’s world.

The two sides agreed on the necessity of proper preparation for the Great and Holy Council that is to be held in the city of Istanbul (Constantinople) in 2016. They stressed the necessity of eliminating all impediments that might impede its being held. His Beatitude the Patriarch of Antioch asked both the Church of Greece and the Greek Foreign Ministry to continue their mediation in order to find a solution to the crisis concocted by the Patriarchate of Jerusalem between herself and the Patriarchate of Antioch, so that this problem will not constitute an impediment to holding the Great and Holy Council.

Concern for the Christians of the Middle East, especially the children of the See of Antioch in Syria, Lebanon and Iraq was not absent from His Beatitude’s meeting with the Holy Synod of Greece. His Beatitude also bore this concern to His Excellency the President of Greece, the Prime Minister and the Foreign Minister, informing them about the suffering of Christians who are weighed down by the horror of terrorism, takfirism, lack of freedom, and the obstruction of prospects for a peaceful solution in their region. His Beatitude stated that this region is being buffeted by interests of nations in changing its borders, obliterating its civilization and dividing up its wealth, exploiting the peoples of the region, with their various religions, sects and affiliations as human shields and fuel to stoke the flames of these conflicts. In this regard, the Chuch of Greece expressed her bitterness over the position of developed countries toward everything that is happening today in the Middle East.

His Beatitude went over with all the officials whom he met the repercussions of the crisis that is sweeping the region for the Church and in particular for her children, whose homes, churches and monasteries have been destroyed and who themselves have been displaced. During their meetings, the heads of the two churches contemplated the bleeding wound of the Antiochian Church and expressed their profound pain on account of the kidnapping of Bishops Paul and Yuhanna of Aleppo over a year and a half ago. The peaceful history of this region has never known a tragedy like this. Even worse, the international community responds to the fate of the kidnapped bishops with a shameful silence that has had a painful impact on the faithful.

The fathers of the Greek Holy Synod and the officials met by His Beatitude assessed the positions and fixed principles of the Antiochian Church, which does not approach the crisis in the Middle East according to a narrow sectarian logic, but rather regards it as a war between the great powers of the world who are exploiting religion in their struggle. In this regard, the Archbishop of Greece said, “The Church of Greece has always been and will always be at the side of her sister, the Church of Antioch in her effort to stop the wars and spread peace with the goal of reconciliation between the country’s inhabitants of various religions. You know very well that anyone who worships God the Creator does not desire this war that is unfortunately supported with extremist and intolerant ideas backed by foreign religious centers.”

Syria and her wounds, Lebanon and her cares, Iraq and Palestine were present in the prayers of Their Beatitudes and those accompanying them in all the places that they visited, especially in the Church of Saint John the Russian on the island of Evia. During their celebration of the Divine Liturgy for the Feast of Saint Demetrius the Myrrh-Streamer, they prayed that peace will prevail in these countries and that God will console their children and strengthen them during their time of trial.

In closing, His Beatitude thanked his brother, the Archbishop of Athens and All Greece and the Greek government and people for the warm reception, hospitality and good organization as well as for for the medal of honor granted to him by the Holy Synod of the Church of Greece, giving this award to all of his children in the See of Antioch who are suffering.

Most viewed articles
“Do Not Weep”144
Best Films of the Pokrov Film Festival Have Been Determined128
Christ the Life Giver126
(VIDEO)Celebrating 5 years of Byzanfest International Orthodox Film Festival78
Patriarch Kirill Answers Questions from Participants of the Ninth Faith and Word Festival72
The Religion of Self68
“He preached the message of the Resurrection for 12 years”: First Bishop of Deva Gurie Georgiu laid to rest at Cathedral of St Nicholas15
Using Our Time Wisely to Cultivate the Seeds of Faith2
Most popular authors
Pravmir.com team278
Archpriest Peter Olsen144
Fr. Theodore Stylianopoulos126
Fr. Gabriel Bilas68
Aurelian Iftimiu15
Priest Luke A. Veronis2