Joint Statement of the Serbian and Antiochian Orthodox Patriarchates 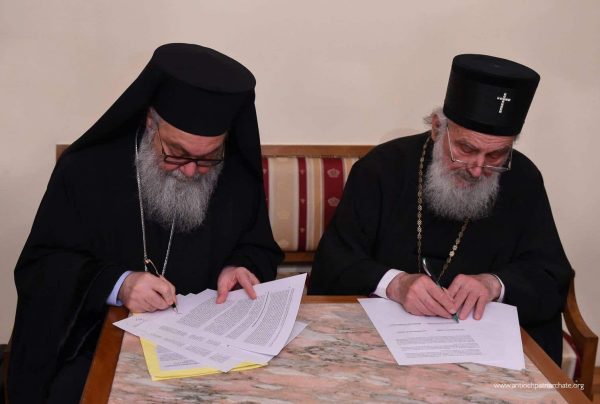 Joint Statement of the Serbian and Antiochian Orthodox Patriarchates
Irenic[1] & Official visit of His Beatitude Patriarch JOHN X to the Serbian Orthodox Church
From October 11th to 19th, 2018

BELGRADE – 19th of October 2018 – This historical visit, the first since Antiochian Orthodox Patriarch THEODOSIOS VI (Abou-Rjaili) visited Belgrade, was made in the context of the difficult and painful circumstances that are facing the Antiochian Orthodox Church in Syria, Lebanon and the Middle East. This visit also coincides with the crisis that is currently facing the world-wide Orthodox Church, where developments are evolving rapidly and in a disturbing manner, and could lead to the occurrence of permanent detrimental impacts on the bonds of communion, peace and unity between brothers.

1.      The visit was an important fraternal occasion for the brothers to meet, and for the Serbian and Antiochian Churches to embrace themselves. It provided a chance to discuss various issues which are common to their Churches’ testimony and witness in today’s world in crisis. It was an occasion also to have a fraternal consultation between both Churches about general Orthodox Church matters and the means to avoid deepening the rift between the brothers, and about the requirements needed to consolidate consultation processes, and the consensus between the Local Orthodox Autocephalous Churches.

2.      The discussions between the two Churches were driven by a high degree of the spirit of brotherhood, love, peace and transparency, and were thus based on true ecclesiastical principles which are distinct from unilateralism and approaches driven by certain interests. This spirit of brotherhood generated consensus and harmony between the two Churches in their discussions. The two delegations reviewed the many similarities in each Church’s respective historical experience (Serbian and Antiochian), given that each of them could be considered as a “witnessing” or “martyrial” Church. This experience helps both Churches, despite difficulties and suffering, to witness to the Truth and to Christ in her original historical jurisdiction and in the world. The discussions covered the common relations between the two Churches and the means to develop and consolidate them. The importance of active and ongoing cooperation and relations between the two churches was emphasized. Such ongoing active relations will include various theological, academic and cultural aspects, etc. The two Churches confirmed that the irenic visit that His Beatitude, Patriarch IRENEE, will make to the Antiochian Patriarchate, will take place in the near future.

4.      The Antiochian and Serbian delegations reviewed the difficult and painful situation that the Antiochian Orthodox Church is facing in Syria, Lebanon, and all the other states and societies of the Middle East. These people are suffering from killing, terrorism, destruction, forced displacement of population, emigration, and the various forms of political and societal instability that have affected their dignity and freedom, and the dignity of their day-to-day living. The two delegations reaffirm the fact that the Antiochian Christian presence in the East is an original one which goes back 2000 years, and that the Christians living there are not, and do not consider themselves as being minorities in this region, but one of the indigenous components of its many states and societies. They are also an integral part of the historical societal tissue of this region and of the Antiochian space and they continue to stay and are strongly attached to their land and to their testimony in this regard.

5.      The two Churches strongly underlined the importance of supporting the Church of Antioch in all that could help this Apostolic Church to continue ahead in her salvivic witness and testimony in the Middle East. This includes encouraging the people to remain in their homeland and to partner in building the “State of Citizenship” which makes them equal in rights and obligations with all the other citizens. Both Churches consider that the only possible solution to put a peaceful end to all the tragedies of the countries of this region, is to remain in the dialogue and the acceptance of the other and its differences, and in adopting open dialogue and peaceful coexistence between all the components. This is accomplished primarily by ensuring the equality of rights and obligations between all citizens. More than ever, promoting peace and respecting religious diversity, are two important factors in spreading peace all over the Middle East.

6.      Both Churches regret the continuing and deepest silence related to the kidnapping of the two Aleppo bishops, Metropolitan PAUL Yazigi and Metropolitan JOHN Ibrahim. After more than five years, the world appears to have forgotten this important humanitarian case. Both Churches make an appeal to all local, regional and international institutions and organizations to urgently resume follow-up of this matter, to reveal the fate of the two bishops, and to make every effort to release them and bring them back to their respective dioceses.

7.      Both the Serbian and Antiochian Churches regret that the dispute between the Patriarchates of Antioch and Jerusalem, resulting from the decision of the latter to elect and ordain an Archbishop for Qatar which is in the historical canonical ecclesiastical jurisdiction of the Patriarchate of Antioch and all the East, has not yet been resolved. The two Churches express regret also that the impact on the whole of Orthodoxy because of this conflict have not been considered in a timely fashion by all the other Orthodox Churches. This is despite the terms of the agreement achieved through the discussions of the two Churches in June, 2013 in the presence and mediation of the Ecumenical Patriarchate and the Greek foreign ministry. These terms have been documented by the mentioned ministry and in the correspondence of the Ecumenical Patriarchate, admitting thus the existence of the agreement and of its terms.

8.      The Serbian and Antiochian Churches express their great concern about the dangers of estrangement, division and separation that threaten the Local Autocephalous Orthodox Churches in our present day. We believe these are a result of unilateral decisions which are impacting the basis of consensus and of fraternal relations between these Churches. Such unilateral decisions are hurting both their unifying bonds and the influence of the Orthodox Church’s testimony in today’s world. The two Churches consider that the current historical momentum is very difficult and sensitive. This momentum requires more than ever before, a lot of wisdom, patience and spiritual vigilance to preserve both the peace of the Orthodox Church and her unity, as well as prevent her from falling, consciously or unconsciously, into the pitfalls of political axes and the political ambitions of nations. Doing so will hurt and weaken the Orthodox testimony and witness in today’s world.

A.      The unity of the Orthodox Christian world and its peace have been placed by Jesus Christ in our hands. Therefore, the two Churches confirm that the strengthening of the unity of the Orthodox Church is a matter of great importance. This is true because the Church is exposed to various dangers and challenges that have originated in today’s world, with its contradictions and divisions, and its various societal and existential impacts on the human person.

B.      It is not possible to translate the unity of faith, in a tangible reality and in an efficient testimony that influences human persons in today’s world, which is torn by existential and societal tensions, if the Orthodox Church does not reveal to the world her Church’s unity. This unity is expressed in her words and by her actions. This unity is expressed through conciliarity (synodality, sobornost), work processes, consultation and decision-making processes based on the traditional canonical order of Orthodox Church and consensus between the Orthodox Churches, whatever their size. The Orthodox Church is one, holy, catholic and apostolic, and is not a federation or a confederation of churches that are separate and independent from each other, acting and reacting based on self-interests, and which appear to the world as a group of Churches in conflict, in dispute, and in estrangement between each other.

C.      In the context of the Orthodox Church’s universal presence all over the world, the Orthodox witness requires today, more than ever, additional openness, discussions, exchanges of expertise and the deployment of traditional canonical conciliarity between all the Orthodox Churches to unify their testimony in the modern world. This is why the two Churches confirm that it is in the best-interest of the Orthodox Church to embark upon a self-critical review of all the unilateral processes and decisions. This will lead to the preservation of the bonds of unity and communion in brotherhood, love and peace between all the Orthodox Churches, being members of one body (the Body of the Christ). We also require a serious, efficient and processual reactivation of the spirit of unity, consultation, conciliarity and the application of the principle of consensus in approaching and deciding on the common matters between Orthodox Churches. These especially include the decisions related to the granting of autocephaly, based on the principles of Orthodox ecclesiology and canonical order.

D.     Orthodox conciliarity is the only efficient way to avoid further deterioration between the Orthodox Churches leading to even deeper estrangement, division and separation. These very things threaten the unity of the whole Orthodox body. Only sound conciliarity, which is based in the first place on the unity of the Eucharistic Chalice, can and should be the basis and the foundation for all we do.

Therefore, and given the urgent need to avoid further escalation in the current crisis, the Serbian and Antiochian Patriarchs appeal to their brother, His All Holiness the Ecumenical Patriarch, to restore the fraternal dialogue with the Orthodox Church of Russia in order to, with the fraternal assistance and participation of all the other primates of the Local Orthodox Autocephalous Churches, resolve the conflict between the Patriarchates of Constantinople and Moscow and to restore back the bond of peace in the Orthodox Church,

[1​] An ecclesiastical word meaning aiming or aimed at peace