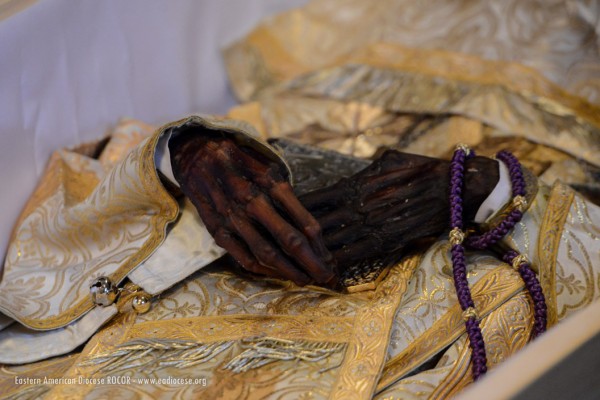 Bishop Constantine fell asleep in the Lord on May 31, 1996, at “Christ of the Hills” Monastery in Blanco, TX. All of the work in organizing the exhumation and transfer of the body to Holy Trinity Monastery, as well as preparing the reburial, was taken up by the monastery’s abbot, Archimandrite Luke (Murianka), along with the brethren. At 1:00 PM, the coffin with the hierarch’s body arrived at the cathedral, and was taken into the church to the peal of bells. Upon opening the casket, the gathered clergy, monastery brethren, seminarians, and faithful laity could see the hierarch’s incorrupt body, which was especially remarkable, explained Fr. Luke, considering that Bishop Constantine’s resting place had been entirely flooded, which had caused his former coffin and his vestments to be eaten away. 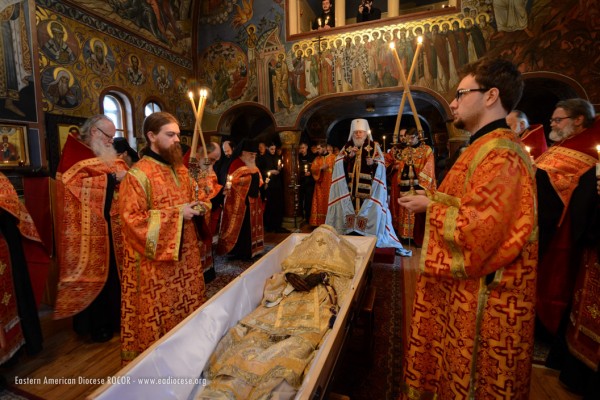 Before the start of the panihida, Metropolitan Hilarion, who knew Bishop Constantine personally, addressed those gathered with a brief sermon, in which he touched on the hierarch’s earthly journey. His Eminence noted the inclination of the hierarch’s soul to spiritual struggle, his prayerful attitude, and his love of fasting. But the reposed hierarch left memories of himself not only in the hearts of the clergy and parishioners, but also in the adornment of churches in the Russian Diaspora. Assigned to Holy Virgin Intercession Church in Glen Cove, Fr. Emmanuel Essensky, making use of his gifts as an iconographer and woodcarver, transformed the former garage into a marvelous church. Upon his consecration to the episcopacy, he labored much in Australia, America, and England. Prone to poor health, Bishop Constantine nevertheless augmented his spiritual labors throughout his entire life. Metropolitan Hilarion buried Bishop Constantine in 1996, when the former was still Bishop of Manhattan, and underscored that the remains being seen by those present are in the same condition today as they were at the time of the hierarch’s burial in 1996.

When the monastery in Texas was closed, the Synod of Bishops discussed several times the issue of reinterring Bishop Constantine’s remains in “a livelier place,” where prayer was being offered regularly. His Eminence thanked Archimandrite Luke for his labors in unearthing the coffin and transferring the hierarch’s remains to Holy Trinity Monastery.

Upon completion of the panihida, Fr. Victor Potapov addressed the worshippers, calling the event “an historic one, about which we will tell our grandchildren and future generations.” Fr. Victor reminded those gathered that the second rector to serve in the Washington community founded by St. John of Shanghai after the holy hierarch himself was Fr. Emmanuel Essensky; and, despite the fact that he did not serve there long, along with St. John he helped provide a righteous beginning for the future cathedral. Fr. Victor noted that, unfortunately, very few written records of Bishop Constantine’s life remain in existence, and called on those who were especially close to him to write down their impressions of the bishop, and called on all of us to pray for the repose of his soul and hope that “Bishop Constantine will answer us with active help, and in the future the will of God will be fulfilled and he will become a visible saint of the Russian Orthodox Church.” 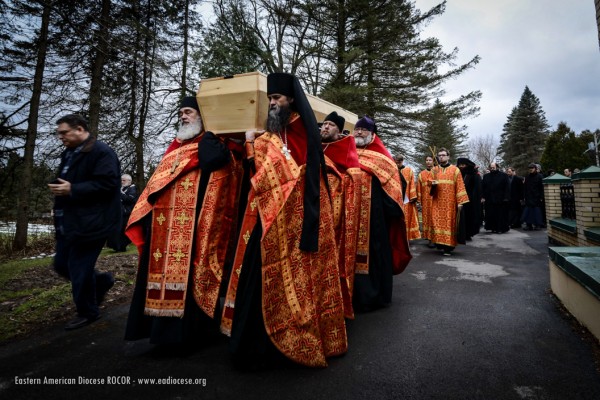 Gathered at the panihida were those who knew Bishop Constantine personally. Deacon George Temidis (member of the Diocesan Council, cleric of Nativity of the Mother of God Church at the New Kursk Root Hermitage in Mahopac, NY), remembers the ever-memorable hierarch when he was still a parish priest in Glen Cove: he baptized Fr. George as a child, and was his first confessor. Fr. George was four years old when he first served in the altar with Fr. Emmanuel, during Paschal Vespers, and from then on remembered him as a man “of emotion, very sensitive, an ascetic who ate barely anything; he concentrated on prayer, and at confession it felt as though he felt and bore our every sin, not only spiritually, but physically, as well.”

For four years, Fr. Michael Taratuchin served as subdeacon to Bishop Constantine in London. With his blessing, Michael enrolled in Holy Trinity Seminary in Jordanville. Fr. Michael remembers Bishop Constantine as a humble hierarch, a man of prayer, who had the gift of tears, and would often weep during the Eucharistic Canon. Fr. Michael noted that Bishop Constantine would lead by example, and was always ready to help those in need wherever he was serving, across three continents.

“We Are Not the Heroes Here,…

They will also deliver lunches to clinics

How to Talk to Children about…