Source: Famagusta Gazette
Natalya Mihailova | 24 October 2014
Cyprus is an integral part of the lives of overseas Greeks and Cypriots, who shall not rest as long as the suffering and injustice on the island continues, Archbishop of America Demetrios said on Thursday. 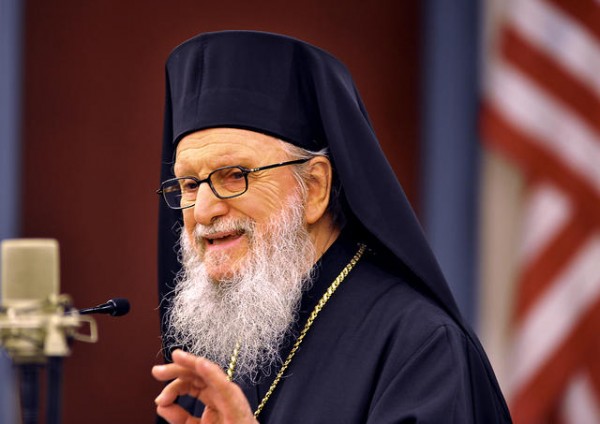 The Archbishop, who is paying an official visit to Cyprus since Tuesday, met in the afternoon with House President Yiannakis Omirou, in Nicosia, and expressed his belief that with the help of God, people will live again in a reunited Cyprus since “it is impossible for justice and truth not to prevail”.

In statements after the meeting, Archbishop Demetrios thanked the President of the House for their constructive discussion and expressed the unconditional support of all Greek Americans.

On his part, Omirou said they exchanged views with the Archbishop who categorically condemned Turkey`s violations of the sovereign rights of the Republic of Cyprus in its exclusive economic zone.

He added that Ankara`s move to dispatch its research vessel “Barbaros” to the area is a new brutal violation of the international law, and the law of the sea in particular.

Omirou expressed deep gratitude to the Orthodox Church and the Greek and Cypriot communities in America, noting that the Archbishop constitutes “a strong voice” that raises the issue of the restoration of the Greek Cypriots` rights, and that his actions have begun to bear fruit.

Turkey, whose troops occupy Cyprus` northern part since the invasion of the island in 1974, does not recognize the Republic of Cyprus, in spite of repeated calls by the EU to normalize relations with Nicosia.

A NAVTEX (Navigational Telex), notice to mariners by Turkey, advising that it was reserving areas south of Cyprus – including parts of the country’s EEZ – for seismic surveys from October 20-December 30, came early on Monday morning into force..

Following Turkey’s provocations, President of Cyprus Nicos Anastasiades announced his decision to suspend his participation in the UN backed negotiations which aim to reunify the island under a federal roof.  — (KYPE)