Karekin II says He ‘Believes in Brotherhood between Christians and Muslims’

Source: Asbarez
Natalya Mihailova | 06 July 2016
ETCHMIADZIN (ArmRadio) —The Pan Arab Al Maydeen News Channel has broadcast an extensive special interview with His Holiness Karekin II, Supreme Patriarch and Catholicos of All Armenians. The interview questions are in Arabic, while the Catholicos’ answers are in Armenian with Arabic subtitles. 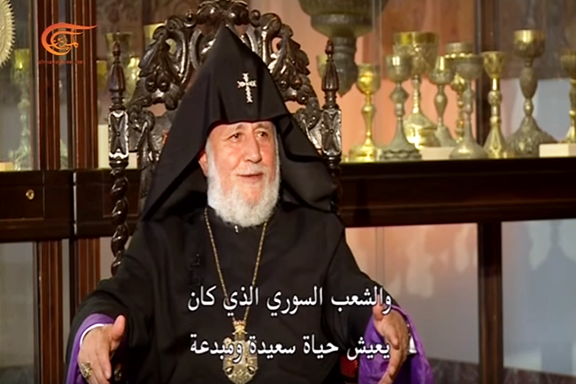 During the interview, the Catholicos touches upon various issues such as the Armenian Genocide, the Pope’s visit to Armenia, the relations between Catholic and Orthodox churches, the Syrian civil war, the suffering of the masses, Etchmiadzin and Antelias relations and other issues.

His Holiness Karekin II indicates that Muslims and Christians in Europe unanimously condemn extremism and stressed that he believes in brotherhood between Christians and Muslims.

He says “Armenia is optimistic that the day will come when Turkey recognizes the Armenian Genocide.”

“Although the crime of genocide was perpetrated against a nation, it is a crime against all humanity,” His Holiness said. “We as a people that have survived genocide, offer our permanent support to nations that face such tragedies, such sufferings.”

“It was also a great pain for us to learn about the assassination attempt against Supreme Head of the Universal Syriac Orthodox Church, His Holiness Moran Mor Ignatius Aphrem II during the ceremony of commemoration of the genocide anniversary,” the Catholicos said.

Speaking about the relations with Turkey, His Holiness Karekin II reminded that the Armenian side offered to open the shared border without any preconditions, but the Turkish authorities turned down the offer, linking the issue to the settlement of the Karabakh conflict.

“There can be no justification to such crimes. We are optimistic that the day will come, when Turkey recognizes the Armenian Genocide and gets rid of this burden, thus paving the way for good-neighborly relations between our countries and peoples,” he said.

“We believe that the Christians and Muslims should continue to live as brothers, just like Armenians have lived with Arab brothers side by side for centuries,” he said.

“The history and present of our people are best examples of friendship between peoples of different nationality and faith,” the Catholicos added.

He stressed that it’s necessary to get rid of stereotypes about Islam and added that Muslims and Christians in Europe unanimously condemn extremism.