Kenya gunmen sought out Christians and non-Muslims as they begged for mercy, praying ‘Jesus, please save us’

Source: Christian Today
The victims prayed to Jesus and it cost them their lives.
Natalya Mihailova | 07 April 2015 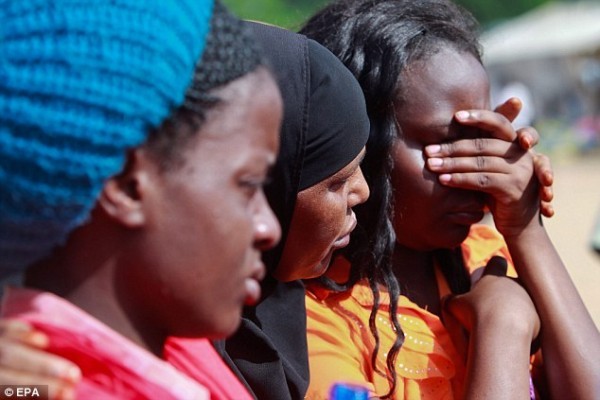 An eyewitness of the deadly assault by Somali Islamist militants on a Kenyan university spoke on Friday of three female students he saw executed as they begged for mercy.

Reuben Mwavita, 21, a student, said the three were kneeling in front of the gunmen, praying for help.

“The mistake they made was to say ‘Jesus, please save us’, because that is when they were immediately shot,” Mwavita told Reuters.

During Thursday’s attack, in which at least 147 people died, al Shabaab gunmen at first killed indiscriminately. Later, though, they divided non-Muslims from Muslims.

“I was confused, I was terrified and was shaking, but I was not screaming and that is what saved me,” said Susan Kitoko, 24, from the hospital, where she was nursing bruises and a broken hip from escaping through a window.

“The attackers were just in the next room, I heard them ask people whether they were Christian or Muslim, then I heard gunshots and screams.”

Others also spoke of harrowing escapes from the killing.

The college’s Christian Union may have taken a lot of the brunt because of an early prayer meeting in the hall.

“They killed all my friends. I was praying with them when we heard gun shots and two guys who wore hoods and carried long guns came in. I escaped because I was standing next to the rear door, so I dashed out with one other friend,” Kenneth Luzakula, a Christian Union student, told Reuters.

“I could hear my friends still praying loudly and calling the name of Jesus Christ,” he said. “Others were screaming. I heard gunshots repeatedly from the toilet nearby where we had hidden. They killed my friends but I know they are all in heaven, because they died because they died worshipping God.”

He said he lost more than 20 friends in the attack.

Most viewed articles
Bloom Where You’re Planted168
Our Lenten Journey110
The Heart of the Scriptures107
Serbian Patriarch Porfirije Gives Interview to Serbian National Television80
Patriarch Kirill Speaks on the Only Right Path79
Metropolitan Onuphry: Fasting and Prayer Are Two Wings That Help People Draw Near God66
Metropolitan Hilarion: Real People in the Virtual World of the Internet Also Need to Hear the Word of a Priest63
Reading the Bible Has Given Christians Hope During the Pandemic – Survey35
Bishop Benedict of Bistrița in Relation to Young People: I Want to Be One of Them31
Moses and the Ten Words15
Most popular authors
Pravmir.com team323
Fr. Jonathan Tobias169
Priest Luke A. Veronis110
Frederica Mathewes-Green107
Aurelian Iftimiu31
Archpriest Lawrence Farley13