A Kingdom Not of This World: The Jewish Messiah and the Roman Centurion

Source: Eastern Chrisitian Insights
God’s reign is not limited by national boundaries or political ideologies. We love, honor, and serve our country, and pray that God will continue to bless America, but our nation is neither our salvation nor our god.
Priest Philip LeMasters | 08 July 2014

In some ways things have not changed much in the Middle East since the time of Christ.  Religion and politics are often closely connected there, and some believe that God wants them to hate and kill those whose beliefs and ancestry differ from their own.  To this very day, many innocent people—including Orthodox Christians and others—suffer in Syria, Egypt, Iraq, Palestine, Israel and elsewhere for being the wrong kind of human being in the eyes of someone with a gun, a bomb, or some other weapon.  Whether a government, a terrorist group, or some kind of militia, the result is often the same for those unfortunate enough to fall into their hands.

Likewise, in the time and place of Jesus Christ’s earthly ministry, many saw a close connection between their religion and their politics, their faith and their nationality. They wanted a savior, a messiah, who would be a political, military ruler who would free their land from the control of the pagan Roman army of occupation who believed that their gods protected their empire.  By the end of the first century, they persecuted Christians who would not worship the gods of the Rome because they were considered traitors who would not do their part to serve the empire.  They crucified the Lord as though he were a rebel, one who challenged the authority of Caesar.  That is why the sign at the top of the cross identified Him as the King of the Jews.  The Romans used His death to remind the Jews what would happen to anyone who dared question their authority.   The leaders of the Jews and the Roman authorities rejected and killed the Son of God because he was perceived as a threat to their particular combinations of religious and political power.

So imagine how strange it must have seemed to everyone when a Roman centurion asked Jesus Christ to heal his sick servant.  A centurion was a Roman soldier with a hundred men under his authority, but this centurion had so much humility that he knew immediately that he was not worthy that Christ should enter his home.  And he had so much faith that he knew that the Lord did not need to enter into order to heal his servant.  “Only speak a word, and my servant will be healed,” the man said.  Our Savior marveled at his faith, which surpassed that of anyone in Israel, of any of the Jews.  This humble, faithful Gentile (who was a hated foreigner and an officer in a brutal army of occupation) was a sign that “many will come from east and west, (from all over the world), and sit down with Abraham, Isaac, and Jacob in the kingdom of heaven.”

In other words, this gospel passage shows that God’s promises to Abraham and his family from the Old Testament apply to everyone with faith in Jesus Christ.  He is the Messiah of the Jews in Whom God’s promises are extended also to the Gentiles, to the entire world, to all people regardless of nationality, culture, or politics.  That is how a Roman centurion became the model of faith, the great example of a stranger, even an enemy, who will join in the heavenly banquet with the saints of the Hebrew people.

He is a sign of hope for us all, for we are Gentiles whose ancestors were not Jews, but who have become heirs of the promises to Abraham in Jesus Christ.  In Him, our ethnic heritage does not matter; our nationality and politics are irrelevant in the Kingdom of God; they do not determine whether we share in the blessings of life eternal.  For as we see in the Lord’s encounter with the Roman centurion, true humility and faith are not the exclusive possessions of any nation or interest group.  People from all over the world will enter God’s Kingdom not because of the passport that they hold, the party to which they belong, or their ethnic heritage, but because they have become participants by grace in the eternal life of the Holy Trinity.

It was dangerous to say in first-century Palestine and it is still a bit uncomfortable to hear in twenty-first century America, but it is the truth:  God’s reign is not limited by national boundaries or political ideologies.  We love, honor, and serve our country, and pray that God will continue to bless America, but our nation is neither our salvation nor our god.  And whatever our political views may be, they must not become our religion; for if we worship even the best earthly powers, we will end up hating our enemies, serving a false god, and shutting ourselves out of the true Kingdom, which is not of this world.

The distinctions between Jew and Greek, between Hebrew and Roman, are broken down in Christ Jesus.  The same is true for all the national, ethnic, and political distinctions that divide people today in our own country and around the world.  There are no political parties in the Kingdom of God, no nations at war with one another, and no rival ethnic groups.   No earthly country or faction is “the chosen people” or the savior of the world.  Our kingdoms, empires, and nations come and go, regardless of how good or evil they may be. God’s reign alone is eternal and we must always be on guard against the idolatry associated with the love of earthly power.

Did you notice that Christ did not call upon the centurion to resign from the Roman army, become a Jew, or oppose any of the policies of the empire?  Instead, He simply praised the faith of that humble man, healed his servant, and used the occasion as an opportunity to prophesy that many foreigners will join the great patriarchs of the Old Testament in the Kingdom of heaven, while many Jews will be excluded.

What an amazing and shocking thing for the Jewish Messiah to say! Do not forget that the centurion was an officer in the army that brutally occupied our Lord’s homeland.  Contrary to what everyone expected, Jesus Christ apparently had nothing against him on that account.  He was not concerned with kicking out foreign invaders.  He did not treat the centurion as an enemy soldier to be defeated or a political foe to be overthrown, but instead as a child of God in whom He saw faith superior to that of His own people.

As hard as it is for us to understand, in Jesus Christ the usual worldly distinctions that divide people are irrelevant.  He is the second Adam Who heals our common corruption and conquers death, which is the wages of sin for all human beings. The blessings of life eternal are available in Christ to all who have the humility and faith shown by that most unlikely believer, the Roman centurion.

Unfortunately, it continues to be tempting to ignore St. Paul’s advice to live as “slaves of God” and not as “slaves of sin.”  The difference between serving God and serving the corrupt ways of the world is not always easy to discern.  Powerful forces in every society want us to worship at their altar and to make God in their own image.  To figure out how to respond to them in our given time and place, we need to follow St. Paul in asking what fruit they produce in us.  No matter how virtuous we believe our opinions and actions are, we must ask whether they lead us to greater holiness.  In other words, hatred and self-righteousness in our hearts are simply symptoms of our slavery to sin, no matter how right we may think we are (or how right we may be) about anything.  “The wages of sin is death” and we must be on guard against the temptation to turn the merciful and life-giving way of Christ into just another version of the fatal lust for earthly power and self-justification that has dominated corrupt humanity ever since the fall of Adam and Eve.

As Orthodox believers, we know that it is nothing but pagan idolatry to put the ways of any earthly kingdom before the demands of the Kingdom of God.  For our hope is not in nations, armies, or politicians, but in our Lord, God, and Savior Jesus Christ who calls all humanity to the eternal blessedness of a kingdom not of this world.   And, yes, all really does mean all who like the Roman centurion receive Him with humble faith.  So let us now follow the example of this righteous Gentile as we join those who come from East and West to sit down with Abraham, Isaac, and Jacob in the kingdom of heaven, in the heavenly banquet already available to us in the Body and Blood of our Lord.  Let us lay aside all earthly cares that we may receive the King of all, for He is truly the Savior of the world. 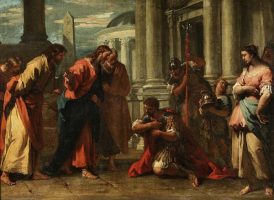 The Healing of the Centurion’s Servant:…
Archpriest Pavel Velikanov 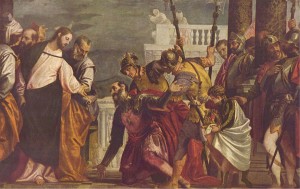