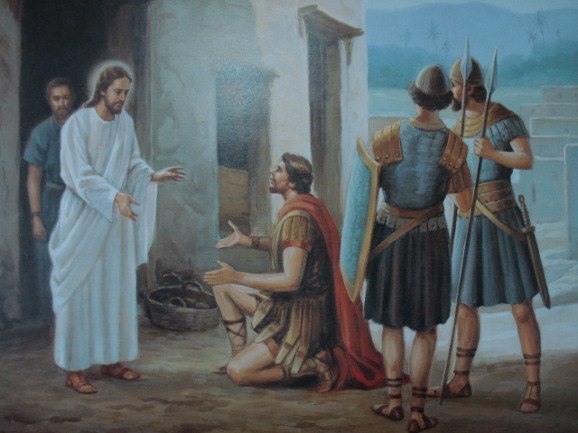 “Seek ye first the Kingdom of God and His righteousness” (Mt. 6:33). This is what last Sunday’s Gospel left with us.

On the day of Pentecost the Lord sent down upon His Church the Holy Spirit. Just as all of nature which, after it had been warmed up by the sun, began to grow flowers, plants, and fruits — so the Holy Church, upon receiving the Holy Spirit, the Giver of Life, began to grow spiritual flowers — her wonderful Saints.

All the Gospel readings since the coming down of the Holy Spirit have been telling us what we must do to obtain the Kingdom of Heaven; what all the Saints did, how they sought and how they found “the Kingdom of God and His righteousness.” We were given the commandments of the Lord. But today we are not given commandments, or a teaching. No, but rather life itself, a living example. And as an example for us, the Gospel reading gives us a Roman centurion, a pagan. This is an example of the most profound humility. This example shows us how a master, out of love for his neighbor, becomes a slave. After all, according to his civic position, this Centurion was master not only over the hundred soldiers which he commanded, but also over all Jews, which meant even over Christ; because the Jews were enslaved by the Romans.

This Centurion had a servant. And this servant fell sick and was suffering terribly. And here the Centurion was told that among the Jews who were subject to him there was a remarkable man who had the supernatural power of healing. Now the Centurion was a pagan. He did not know Holy Scripture, he knew nothing about the Messianic expectations of the Jews. For him Christ was without doubt a great man, but nevertheless just a man, and subject to him besides. He could have sent for Him, summoned Him. But humility blots out all boundaries. His servant was in danger, and this man could help him.

The Centurion himself went to Christ. He went and asked: not for his wife, not for his son, not for his daughter, father or mother, but for a servant. And he asked a Jew, enslaved by Rome; a Roman citizen asked for mercy, as a slave would ask his master. And he said: “Lord, my servant lieth at home sick of the palsy, grievously tormented” (Mt. 8:6). He said nothing more. In these words trembled all his sorrow. And he brought his sorrow to Christ. Now he stood humbly and with bowed head waited for an answer. “I will come and heal him” (Mt. 8:7), Christ quickly answered. How very simple. But look what happened here, to what incredible height the Centurion’s faith and humility rose. He stopped Christ: “Lord, I am not worthy that thou shouldest come under my roof (Mt. 8:8). Listen… “I am not worthy.” Now this is repentance. This is the same as if he had said: I am a sinner and you are a righteous man. “But speak the word only, and my servant shall be healed” (Mt. 8:8). Only a word. Even the Lord was surprised at such faith. “I have not found so great faith, no, not in Israel” (Mt. 8:10). And indeed the Centurion’s faith was so simple, so very humble. “I am a man under authority, having soldiers under me; and I say to this man, Go, and he goeth, and to another, Come, and he cometh” (Mt. 8:9). What do these words express? This is what: Thou art Lord over sickness and health, over life and death. Only say the word! One word!

And Christ said this word: “Go thy way, and as thou hast believed, so be it done unto thee. And his servant was healed in the selfsame hour” (Mt. 8:13).

What a reward for humility! This is what humility can do! May the Lord grant us this humility of the Centurion. 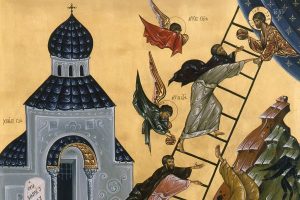 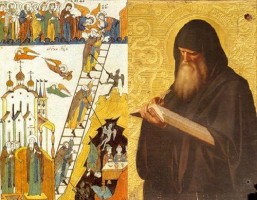 Reading and applying what we have read is already useful in itself, because it helps us…

Metropolitan Onuphry: We Are Called to…

If we love our enemies, do good deeds and lend things to…

Most viewed articles
Drifting Away217
The Conscience We’ve Forgotten117
Patriarchate of Antioch Warns Parents Against Violent Shows104
Archdiocese of Australia Raised $ 636,000 for Those Affected by Wildfires in Greece79
Metropolitan Onuphry: We Are Called to Be Like God75
Loving the Enemy39
Chapel of Life-giving Spring and St. Nectarios under construction at Bucharest Oncology Centre2
Most popular authors
Pravmir.com team258
Priest Luke A. Veronis217
Protopresbyter Themistoklis Mourtzanos117
Fr. Theodore Stylianopoulos39
Aurelian Iftimiu2