Source: B92
Natalya Mihailova | 26 April 2014
GRAČANICA -- A graffiti reading "UCK" - Albanian for "KLA", the so-called Kosovo Liberation Army - appeared on the gate of the Visoki Dečani Monastery early on Friday. 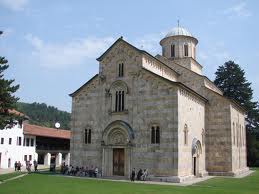 This is according to a statement issued by the Eparchy of Raška and Prizren of the Serbian Orthodox Church (SPC).

The 14th century Serbian monastery is located in western Kosovo and is on UNESCO’s World Heritage List.

“This is the latest in a series of similar provocations by Albanian extremists who previously wrote messages containing hate speech on the church wall in Đakovica, after which similar writings appeared on the facades of Serb houses in Orahovac,” the Eparchy said.

This time, extremists wrote on the very gate of the Visoki Dečani Monastery, only a dozen metres from the KFOR’s Italian checkpoint, according to the statement.

The Eparchy of Raška and Prizren noted that this act constitutes an open threat to the Visoki Dečani Monastery and its brotherhood.

The Eparchy recalled that armed Albanian extremists attacked the monastery on four occasions “in the course of the so-called 15 years of international peace in Kosovo and Metohija,” and the monastery brotherhood received threats several times.

The Eparchy noted that the latest threat and provocation is “a consequence of the nationalist rhetoric which has been spreading through the local Albanian-language media against the monastery where monks provided assistance to Albanian refugees and refugees of other ethnicities during the war.”

The latest incident is also an indicator that the safety of holy sites in Kosovo and Metohija is still in jeopardy, even when guarded by KFOR, the Eparchy said.

Abbot Archimandrite Sava of Visoki Dečani wrote to international representatives about the latest incident and called on them to reinforce protection measures at the monastery which has been on UNESCO list since 2005.

“Although such provocations pose jeopardy for the safety of monks and Orthodox believers, as well as numerous tourists from around the world, they are most detrimental to Kosovo which remains the only area in Europe where Christian monuments and holy sites are still in jeopardy,” the Eparchy noted.