Source: B92
Natalya Mihailova | 12 January 2015
LJIPLJAN -- Graffiti spelling out the Albanian acronym of "the Kosovo Liberation Army (KLA)" - UCK - appeared on the walls of a Serbian Orthodox church in Kosovo. 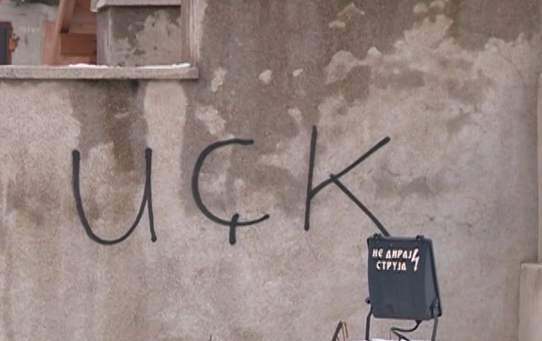 The Church of Saint Flora and Lavre in the town of Lipljan was found defaced in this way on Saturday morning.

The police and the Diocese of Raska and Prizren have been notified about the incident, Tanjug reported.

President of the church municipality of Lipljan Zoran Simijonovic said that citizens notified him about the graffiti some time around 8 a.m. this morning, after which the police were called to inspect the area immediately.

According to him, citizens are distraught although no inter-ethnic problems in the area have been recorded of late.

“We did not see something like this coming and we are worried about potential new incidents,” Simijonovic said and added that all institutions of the Lipljan municipal assembly have been notified about the incident.

Chief of the Kosovo Administrative District Srdjan Petkovic noted that Lipljan citizens are frightened and that they did not wish to appear in front of reporters’ cameras because they are afraid of potential retaliation.

“I would like to think that this is not connected to the events which occurred in France in the past few days, but it is obvious that every extreme situation or extremist action in the world echoes here as well,” Petkovic said.

Lipljan priest Slavisa Spasic said that the appearance of the graffiti on the church walls was a distressing experience for Lipljan citizens and Serbs.

No incidents involving the church happened until now and no problems ever occurred here before, Spasic said.