Source: Christian Today
A Christian girl cried "forgive them" as she died in her mother's arms after ISIS fighters torched their home.
Harry Farley | 27 May 2016 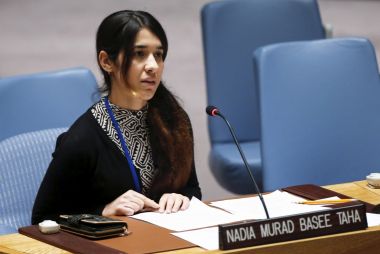 Reuters/ Nadia Murad, 21, is another former ISIS slave and is now campaigning for the Yazidi people being massacred by ISIS.

The young girl, thought to be 12 years old, died from her burns after the militants attacked her family’s home in Mosul, Iraq. Her story was among a number heard at a conference on the persecution of Christians in New York last month.

A human rights advocate described how the young girl had been in the shower when the jihadis came knocking.

“You have two choices, you are to leave or you are to pay the Jaziya,” they told the girl’s mother, according to a human rights advocate at the conference.

Her mother responded: “I will pay, just give me a few seconds, my daughter is in the shower.”

At this point the militants stormed the house shouting “you don’t have a few seconds.” They set the building on fire and left. Both mother and daughter managed to escape the burning building but the child had severe fourth degree burns and was rushed straight to hospital.

She died in her mother’s arms at the hospital. The last words she said were “forgive them”.

Jacqueline Isaac, a human rights advocate who relayed the story, said: “In the midst of darkness there is light. When there is light, there is hope.”

Isaac is the vice president of the advocacy group Road of Success and was among a number of speakers at the three day #WeAreN2016 event.

Another speaker was the 15-year-old Samia Slemen. She spoke of her experience as an ISIS captive for six months. Men and women captives were seperated. Girls as young as seven were raped and forced to convert to Islam, she said. Some older women were killed because they were not considered worthy to be kept as sex slaves.

“Why don’t we see any action being taken? Even though it’s been over a year and a half now, we’ve seen horrible things happen to us minorities, especially Yazidis and Christians, in that region, and we don’t see the international community taking concrete actions against the Islamic State.”