Lazarus Saturday at Bethany Community of the Resurrection of the Lord 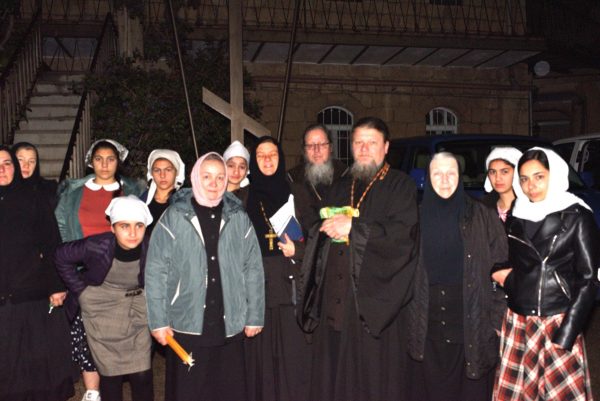 During these holy days of Great Lent and Passion Week throughout the world, churches have been closed. By Divine allowance, government officials of many nations have, from fear of the spread of COVID-19, announced general quarantines, including in the Holy Land. Christians have limited access to holy sites, deprived of spiritual support, common prayer and the partaking of the Holy Gifts of Christ in their churches.

Still, daily divine services are being celebrated in the churches of the Russian Ecclesiastical Mission in Jerusalem of the Russian Church Abroad. The clergy, brethren and sisters of the mission pray that the Lord replace His righteous wrath with mercy and would root out this illness and the fear it causes for our true repentance, and that He grant state officials wisdom and discernment.

Lazarus Saturday is always a joyous event in the Bethany Community of the Resurrection of Christ (what is known now as the town of Azaria), where Righteous Lazarus and his sisters Martha and Maria lived. From Holy Scripture, we know that Christ often visited His friends, who loved and always happily welcomed Him. On this day, which precedes His salvific sufferings, Crucifixion and Resurrection, the Holy Church praises His raising of Lazarus, who had been dead for four days.

This year’s celebration was modest but solemn. Archimandrite Roman (Krassovsky), Chief of the Russian Ecclesiastical Mission in Jerusalem, arrived for evening services. Though entry into Bethany is blocked, Fr Roman and Monk Avenir, after a brief questioning, were kindly allowed through. The Bethany Community operates a girls’ boarding school, which following the quarantine, still has 13 students living there. Archimandrite Innokenty (Sereda) lives there as well, among the nuns and students. Great compline and matins were performed at the upper Church of Righteous Lazarus, Martha and Maria.

According to the custom, after evening services, everyone visits the grave of St Lazarus where he was resurrected by the Lord. This year, it is closed to pilgrims, but in response to a request sent to the municipality, the small community was granted permission to visit. It was the only visit allowed on this holy day. The pilgrims entered with lit candles, and after hearing the reading of the Gospel of the day, they prayed for all Orthodox Christians who were unable to participate in the pilgrimage, and who were unable in general to attend church. Venerating the place of Lazarus’ resurrection, the pilgrims departed at the crack of dawn.

Returning home, everyone went to attend midnight office service. Archimandrite Innokenty then performed the minor blessing of the waters next to the chapel, where Martha had me the Lord just before He resurrected His friend. It was during this meeting that Jesus Christ openly revealed His Divinity. Despite the rain that began to fall, there was an elevation of everyone’s spirit.

Fr Roman and Fr Innokenty then celebrated Divine Liturgy as Mother Maria (formerly Nun Martha), elder sister of the community, directed the singing of the girls. Special prayers were lifted for Abbess Elizabeth of Gethsemane Convent of St Mary Magdalene and her nuns, who were unable to attend this year.

After the service, which was followed by a special Service of Intercession to Righteous Lazarus, Martha and Maria, the members of the community made a traditional procession of the cross around the grounds, blessing everyone with the cross, icons and holy water.

Mother Maria was then congratulated on her namesday.

May Christ God bless and support her for many good years.