Source: OCA
Natalya Mihailova | 30 August 2017
A lone suspect was taken into custody in the early hours of Tuesday, August 29, 2017, confessing to attacks on two parishes of the Orthodox Church in America on Sunday morning, August 27. 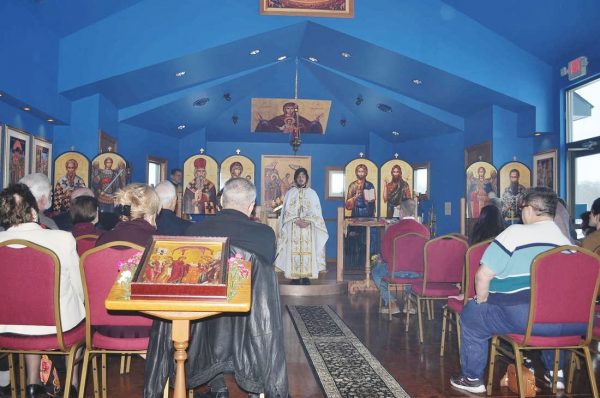 According to Priest Mikel Hill, Rector of Saint Nikolai Mission, Louisville, OH, “the suspect made a full confession” that included setting fire to the inside of the church, as well as damaging a large cross in front of Saint Nicholas Church, Alliance, OH.  Established two years ago, Saint Nikolai Mission is within the OCA’s Bulgarian Diocese, while Saint Nicholas Church, which dates back to 1912, is within the OCA’s Romanian Episcopate.  Priest Ilie Geani Nemes is Rector of the Alliance parish.

Fire officials were convinced from the start that the churches, which are a mere five miles from each other, were targeted.

“It is definitely arson, there is no question,” township Fire Chief Matthew Anstine told CantonRep.com reporters.  When firefighters arrived at Saint Nikolai’s at 8:26 a.m. Sunday, the fire had burned itself out.

Meanwhile, at about 8:00 a.m., vandalism at Saint Nicholas Church also was discovered.

“They cut down a hand-carved wooden cross that was enshrined in front of the church,” Alliance Police Officer Aric Cook told CantonRep.com reporters.  “They just vandalized the cross out in front of the church, causing about $75,000.00 in damage.  Some neighbors heard the chainsaw at approximately 5:30 a.m. (Sunday).”

The faithful at Saint Nicholas Church are able to use their church, which is not the case with Saint Nikolai Church.

“Much of the interior of the church experienced smoke and related damage,” said Father Mikel, who discovered the fire as he arrived early Sunday morning.  “While we anticipate that insurance will cover the bulk of the damage, we will probably have to renovate the interior down to the studs.  We lost all of our vestments, our Gospel book and tabernacle, and many liturgical items.”

It appeared that after gaining entrance into the church by smashing a window, the arsonist sprayed accelerants throughout the building to intensify the fire.

Updates will be posted on the OCA web site as they are received.