Love and Faithfulness Do not Disappear or Die out

Source: St. Nicholas Church
Those who in time of "success" seemed so removed, whom we al­most never meet in the pages of the gospels, to whom Christ had given no advance word of his resurrection, and for whom therefore everything ended and was lost on the night of the Cross–these were the people who proved faithful, who remained at the Cross in steadfast human love.
Protopresbyter Alexander Schmemann | 26 April 2015 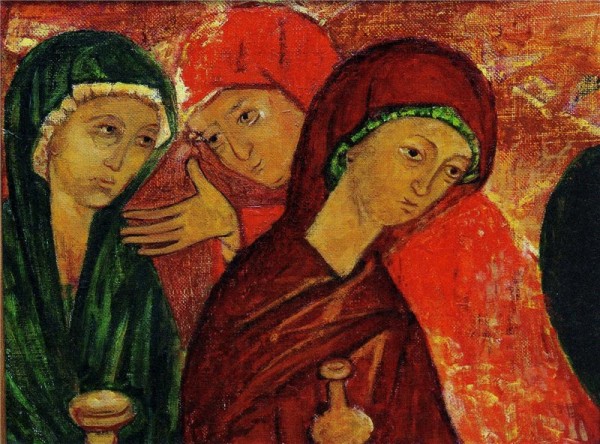 Listening to the account of Christ’s crucifixion and death during Holy Week, I am invariably struck by one detail in the story: the loyalty to the very end of a handful of people, mostly women, about whom the gos­pels tell us almost nothing else. What we do know is that Christ’s disciples, all of them, ran away and left him behind. Peter denied him three times. Judas betrayed him. Crowds followed Christ while he was preaching, and each person was expecting to get something from him: they expected help, miracles and healings; they expected liberation from hated Roman occupation; they expected him to put their earthly cares in order. These countless people poorly understood the meaning of His teaching, if they even really heard it at all, of self-renun­ciation and love, of wholehearted self-giving. For them, Christ was a handout, an offer of help, and so they came and followed. But then came growing hatred toward him on the part of the national leaders and those in authority. In Christ’s preaching of love the crowds now began to hear him foretelling that, through this love, He would offer himself as a sacrifice. And the crowd began to thin, to melt away. Christ’s earthly glory and human success burst into bright flame for the last time on the day of his triumphant entry into Jerusalem, when, in the words of the gospel, “all the city was stirred” (Mt 21:10). But that was only for a moment. And even then, didn’t the crowds greet him with such joy and enthusiasm only because, once again, they wanted and expected him to give them an earthly kingdom, earthly victory, power, and glory?

All of this suddenly ended. The light went out, and after Palm Sunday came the darkness, loneliness and inconsolable grief of Holy Week. And was not the most painful part of these final days the betrayal by close friends and disciples to whom Christ had truly given himself totally? In the garden of Gethsemane, even the three disciples closest to him did not stand firm, but fell asleep while Christ was in final agony, sweating blood and preparing for a horrible death. We know that even Peter, who so loudly promised to die with Christ, wa­vered at the last moment and renounced, rejected and betrayed him. And “Then,” writes the evangelist, “all the disciples forsook him and fled” (Mt 26:56).

But not all, as it turned out. The Cross brings on the hour of simple human faithfulness and love. Those who in time of “success” seemed so removed, whom we al­most never meet in the pages of the gospels, to whom Christ had given no advance word of his resurrection, and for whom therefore everything ended and was lost on the night of the Cross–these were the people who proved faithful, who remained at the Cross in steadfast human love. The evangelist John writes, “Standing by the Cross of Christ were His mother, and His Mother’s sister, Mary the wife of Clopas, and Mary Magdalene” (Jn 19:25). Later, after the death of Jesus,

When it was evening, there came a rich man from Arimathea, named Joseph, who also was a disciple of Jesus. He went to Pilate and asked for the body of Jesus. Then Pilate ordered it to be given to him. And Joseph took the body, and wrapped it in a clean linen shroud, and laid it in his own new tomb, which he had hewn in the rock; and he rolled a great stone to the door of the tomb, and departed. (Mt 27:57-60)

One day later, after the sabbath, at dawn on the third day, the same women came to the grave, in keeping with the custom of that time, to anoint the dead body with aromatic spices. And it was precisely to them that the risen Christ first appeared. They were the first to hear from him that “Rejoice” which forever afterwards be­came the essence of Christian strength. Christ had not revealed the mystery of the future to these women, as He did to the twelve chosen apostles. They knew neither the meaning of his death nor the mystery of his approaching victory in the resurrection. For them, the death of their teacher and friend was simply death, the end; even worse, it was a terrible and shameful death, a terrible and abrupt end. They stood at the Cross only because they loved Jesus, and in loving him, suffered with him. They did not leave his poor, tortured body, but did all that love has always done at final separation.

Those whom Christ had asked to stay with him at the hour of his agonizing struggle, when He “began to be greatly distressed and troubled” (Mk 14:33), dropped him, ran away and renounced him. But those from whom He asked nothing remained faithful in their simple human love. “Mary stood weeping outside the tomb” (Jn 20:11). Down through the centuries, love has always wept in this way, as Christ wept at the grave of his friend Lazarus. Here then, it is this love which first learns of the victory; this love, this faithfulness is the first to know that there is no longer any need for weeping, for “death is swallowed up in victory” (1 Cor 15:54), and hopeless separation is no more.

This is what the Sunday of the Myrrh-bearing Women means. It reminds us that the love and faithfulness of a few individuals shone brightly in the midst of hopeless darkness. It calls us to ensure that in this world love and faithfulness do not disappear or die out. It judges our lack of courage, our fear, our endless and servile rationaliza­tions. The mysterious Joseph and Nicodemus, and these women who go to the grave at dawn, occupy so little space in the gospels. Precisely here, however, is where the eternal fate of each of us is decided.

Today, I think, we are especially in need of recover­ing this love and basic human loyalty. For we have en­tered a time when even these are being discredited by harmful concepts of the person and human life now pre­vailing in this world. For centuries, the world still had the weak, but still flickering and shining, glow from that faithfulness, love and co-suffering which was silently present at the sufferings of the Man cast aside by all. And we need to cling, as if to a last thread, to everything in our world that still thrives on the warm light of simple, earthly, human love. Love does not ask about theories and ideologies, but speaks to the heart and soul. Human his­tory has rumbled along, kingdoms have risen and fallen, cultures have been built and bloody wars fought, but what has remained unchanging on earth and in this troubled and tragic history is the bright image of the woman. An image of care, self-giving, love, compassion. Without this presence, without this light, our world, regardless of its successes and accomplishments, would be a world of terror. It can be said without exaggeration that the human­ity of the human race was, and is, being preserved, saved, by woman–preserved not by words or ideas, but by her silent, caring, loving presence. And if, despite all the evil that dominates the world, the mysterious feast of life still continues, if it is still celebrated in a poverty-stricken room, at a barren table, just as joyously as in a palace, then the joy and light of this feast is in her, in woman, in her never-fading love and faithfulness. “The wine gave out…” (Jn 2:3), but while she is here–mother, wife, bride–there is enough wine, enough love, enough light for everyone …