Lukashenko calls for unity in church, between nations

Source: Belarusian Telegraph Agency
Natalya Mihailova | 07 January 2017
MINSK, 7 January (BelTA) – There is a need for unity between nations and inside the church, Belarus President Alexander Lukashenko said as he attended the Holy Spirit Cathedral in Minsk to celebrate Orthodox Christmas on 7 January. 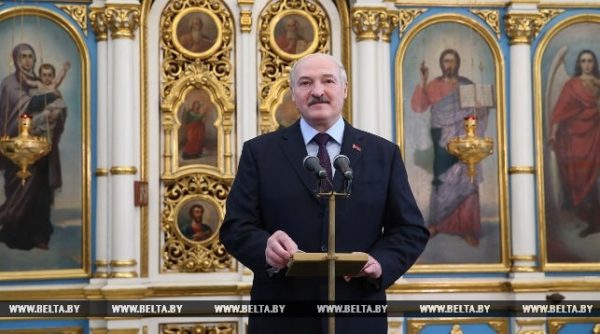 “There are talks of the need to separate, stand out, something else like that. You know the life will set the things straight. There is no need in putting the cart before the horse. There is no need in raising issues which do not exist yet. We feel fine that today we are together with our brotherly nations: Russians, Ukrainians, other nations and nationalities who live in our states,” the Belarusian leader said.

“I spoke at the Synod about the issues we have to address in the church and the state. It has nothing to do with the proposals to cut the ties and separate. We should not do this. We need to stay calm and settle the matters we have today and also look into the future, but not too far, of course. Otherwise, we can make mistakes. Nowadays, it would be inadmissible. We also should be careful with choosing priorities during these turbulent and uncertain times,” noted the President.

“We always speak about moral virtues, sources of spiritual strength. In this temple I would like to mention another important value. It is our church, our main Christian churches. They have always been and, I hope, will remain in the center of unity. They will be the main power uniting peoples, the nation, us, in this very case,” the President said.

In his words, the Belarusian authority views the Orthodox Church as a very good partner, a supporter of all good ideas in the state, such as the restoration of holy places, the support of the family, morality, cultural values.

“Church has always lent its shoulder to our people. It has always been in the epicenter of all the important events,” the head of state added.

Alexander Lukashenko believes that the pastoral word is vital in the current modern world where an individual often finds it difficult to find his/her way and understand the processes that are taking place around.

“Our church is the most responsible church in the world, the fairest and most sincere. Our church has never told lies to our people. I should also note that we also have never given reasons for our church to behave inappropriately,” the President noted.

The church and the situation around and inside it will always depend on the people themselves.

“What church is will depend on the people. The same is true with the authorities. We should always remember this. You [Metropolitan Pavel] were right saying that the year was difficult. The future year, as the previous one, will depend solely on us,” said the President.