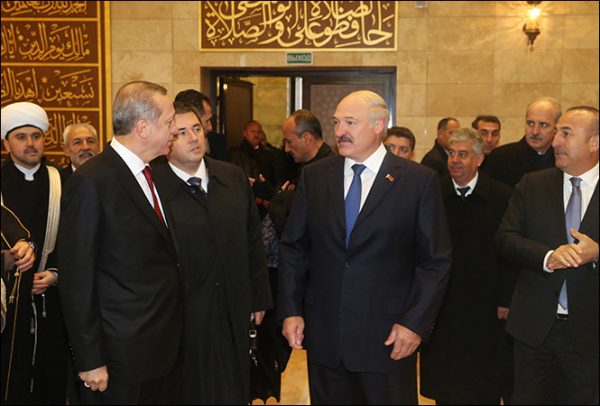 “From the earliest times Belarus has been famous for its traditions of religious tolerance and mutual respect between people of different faiths and nationalities. That is our pride, our strength, which is a guarantee of our resilience,” Lukashenko said.

He said that Belarus is a country of a peaceful nature.

“We value peace and tranquility; that is why we build churches for all faiths. We adhere to one motto: any citizen of our country is entitled to find their own way to their own church and no one has a right to force them to behave differently. Thus we are opening today this great cathedral, which will not only become a house for Muslims, but also will make a significant contribution to the development of the culture of our Belarus,” Lukashenko said.

“I am confident that the Cathedral Mosque constructed with the personal support of Turkish President Erdogan, my good friend and colleague, will become an important spiritual center, source of enlightenment and dissemination of humanist ideas and the true values of Islam for Muslims in Belarus and the entire Belarusian nation,” the Belarusian president said.

The presidents of the two countries learned about the mosque’s facilities and left signatures in the Book of Honorary Guests of the Cathedral Mosque in Minsk.

A previously existing mosque in Minsk was closed down in 1949 and the building was blown up in 1962. Construction of the new religious building began in 2004; however, it was frozen due to the funding in 2010. The work concluded with co-funding from Turkey’s Religious Affairs Directorate this year.

The opening of the mosque with the participation of Turkish President Erdogan was scheduled for late July 2016. The date of the ceremony and Erdogan’s visit were postponed due to a coup attempt in Turkey.

The mosque’s prayer room can accommodate over 1,500 people at a time.

According to different estimates, over 30,000 people in Belarus are of the Muslim faith.