Lukashenko: Nation’s unity around genuine values is a guarantee of future and progress

Source: Belarusian Telegraph Agency
Natalya Mihailova | 13 January 2016
MINSK, 12 January (BelTA) – The unity of the nation around genuine, constructive values is a guaranty of its future existence and progress, Alexander Lukashenko said at the ceremony to present the President's awards For Spiritual Revival and special prizes to Belarusian art luminaries, and also President's special prizes Belarusian Sports Olympus to renowned athletes on 12 January, BelTA has learned. 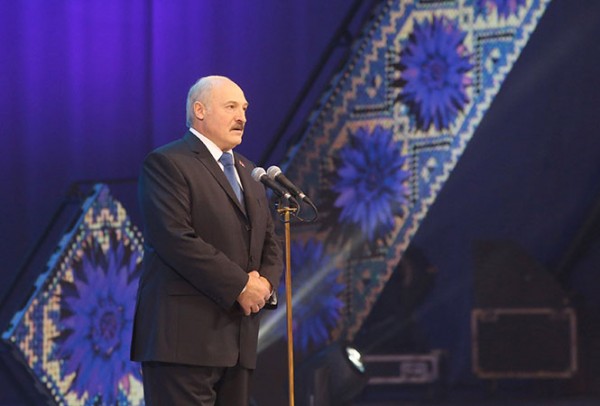 “In the modern world, the nation’s unity around genuine, constructive values is a guarantee of its future existence and progress, spiritual health and prosperity,” the head of state emphasized.

Therefore, it is not by chance that Belarus was named the symbol of peace at the 70th session of the United National General Assembly. “Belarusian people are able to learn from the lessons of the past. We value the clear sky over our heads and the tranquility in the society. We stay committed to high moral values and good traditions,” the Belarusian leader noted.

Alexander Lukashenko believes it is important for the Belarusian art luminaries to realize this and stand against ill-mannered behavior, lack of culture and other negative phenomena with their creative work.

The President said that the awards for the contribution to the development of culture and art, charitable work, and active participation in the protection of motherhood and childhood attest to the fact that spirituality, moral and aesthetic principles are upheld in Belarus.

This year, the awards For Spiritual Revival were conferred on the national center Mother and Child and the National Art Museum, ministers of the Russian Orthodox Church and the Roman Catholic Church, and the authors of the requiem book To Live and Remember. Special prizes of the President were presented to journalists, scientists, artists, and the team of the Belarusian State Museum of the History of the Great Patriotic War.

“We also honor our eminent athletes with special prizes Belarusian Sports Olympus. Your commitment, will to victory, and diligence set a good example for future champions who will further glorify Belarus,” Alexander Lukashenko noted.

He expressed confidence that the gained nationwide recognition will encourage the awardees to achieve new heights for the benefit of the country.