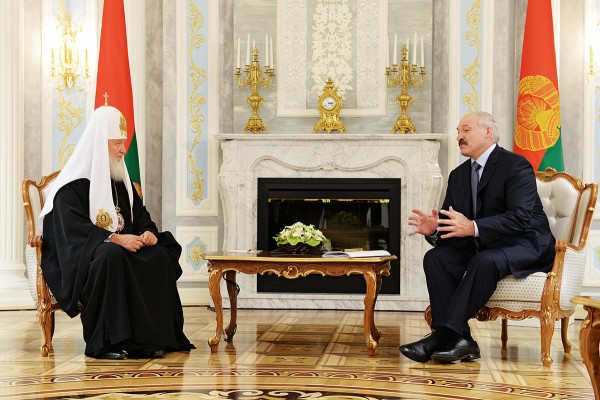 “We are brothers – Russians, Belarusians, Ukrainians – we come from the same root. We are in pain when our brothers are in trouble. We will do our utmost to cushion the situation in at least some way and if possible, stop this fratricidal war,” Lukashenko said as quoted by BelTA state news agency.

The patriarch thanked Belarus for its role in organizing talks on a settlement in Ukraine.

“This is a wound in my heart. The canonical Orthodox Church has people from both the East and the West among its flock. This places special responsibility on the church,” he said.

“Today our Church is the only organization in Ukraine and the only power that has retained its peacekeeping potential because it has not identified itself with either side,” the patriarch said.

He stressed that the flock should not be divided on political grounds.

Lukashenko added that people of different creeds in Belarus feel no problems in their relationships.

“I don’t see any problems in the relations of our believers. We greatly appreciate this and will try to save them, as much as possible,” he said.

“Catholics and Orthodox Christians live very peacefully with each other. We have no claims to make to each other. We are trying to help both so that it would be convenient for people and that everyone would find one’s own way to the church,” he added.

Lukashenko said that the Belarusian Orthodox Church plays a leading role in the country’s religious life. “Belarus is a bulwark of Orthodox Christianity on the western frontier of our once glorious Fatherland,” he stressed.

He said that Orthodox Christianity is “powerful as ever” also in the south and west of Belarus where many Catholics live.

Most viewed articles
Seven Lessons for the New Year from St. Seraphim of Sarov232
A Great Time to Join the Orthodox Church143
New Jersey Governor Signs Bill Legalizing Abortion Up To Moment of Birth98
The Way of Christ Is The Way of Love68
Metropolitan Hilarion Celebrates the 20th Anniversary of His Episcopal Consecration56
Metropolitan Hilarion: the Church and traditional confessions have done everything possible to improve the situation in Kazakhstan38
Brooklyn Street Co-Named for Antiochian Pastor Who Served a Half Century There36
4-400×6001
Sunday of the Samaritan Woman1
How We Worship: the Struggle of the American Experience1
Most popular authors
Priest Luke A. Veronis232
Frederica Matthewes-Green143
Ryan Foley98
Pravmir.com team94
Fr. Theodore Stylianopoulos68
Peter Samore36