Amid all of the sugary sweetness of the Christmas season, the Orthodox Faith hits you in the face with a pie of sadness. Where do we place the terror and madness of the slaughter of male babies of Bethlehem in our Christmas shopping, decorations, and parties? Though this story is read as a part of the Nativity story, there is still a basic disconnect in many minds with this morbid detail.Christmas is about love, peace on earth, shepherds, wise men, and goodwill towards men and women. These themes overshadow any tragedy. Add good old Santa Claus to the mix and the story disappears altogether.

The problem may rest in the fact that the beginning of the story is separated from its end.Nativity is separated from the crucifixion. The Orthodox Church never loses sight of this fact. Our theology says that the reason why Christ is born is to trample down death by his own death. The Incarnation, Nativity, occurs to destroy the power of death. So, it isn’t any surprise to us that at the very beginning, death tries its best to snuff out its most powerful enemy, the Son of God. Death raises up King Herod, and in his madness and lust for power, he sends out his soldiers to kill the Innocents. It isn’t 4 or 5 babies that he has killed, but 14,000. Such is the power and madness of death.

Yet, death cannot reach the Infant Jesus. Life says a defiant “no” to death. Joseph, though an old man, is warned in a dream and flees with his family to Egypt. You can’t help but notice the parallels and symbolism between this story and the Old Testament. Pharaoh threatened to kill the innocents of Israel, but instead the children of Egypt die. Israel leaves Egypt and makes it to the Promised Land. Now Herod the King threatens the children of Bethlehem, and the new Israel flees to Egypt. To the Jews, the two places that embodied evil were Babylon and Egypt. Now the Christ child had been embraced by Babylon in the Magi, and he goes to Egypt to sanctify it. God is wondrous in his ways. 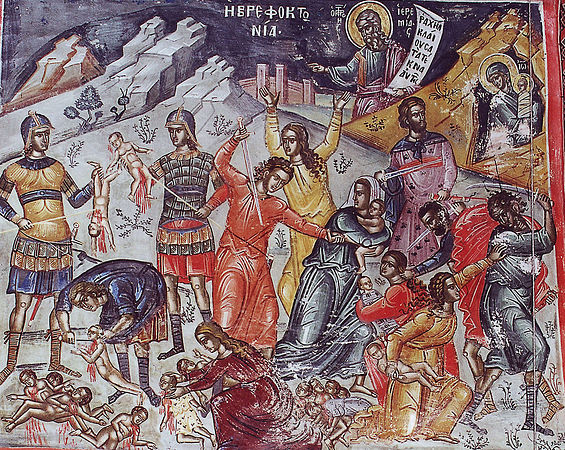 The first martyrs for Christ were the infant boys of Bethlehem and the surrounding areas. Yet, in another amazing parallel, the child who flees to Egypt to escape Herod will one day stand before another Herod, and by his martyrdom, he will bring life to the world and to all those who follow him, especially to all the holy innocents of history. Over the last 2,000 years, there have been many innocents of many age levels who have died unjustly. He gives life to all of them, beginning with the Holy Innocents of Bethlehem. Even to this very day, he takes the holy innocent children to himself.

There is another parallel – Mad Herod sends out his soldiers and tries to kill me. Death seeks to claim me. Mad Herod tries to kill the innocents in me. He can be Satan or sometimes the world, but most often Mad Herod is just me. St. Paul called the Mad Herod in me “the flesh”, or my “carnal mind”, or “the old man.” Once, when the Christ Child was first born in me, I thought I heard the Angles sing when I entered the waters of Baptism. Purity and life was given to me as a free gift. Then Mad Herod rose up to slay me. He sought to kill my mind with entertainments and my soul with carnal pleasures, passions and sins. He sought  to kill my prayer life with a spirit of boredom. Seeking excitement and diversion,  my bible became a doorstop and my prayer book a glass coaster. Mad Herod even sought to make my Church and its liturgies seem more like a chore, so I placed it on my list as one among my other “interests.”

Why do I give Mad Herod the authority? The answer is simple: no one will rule in my heart but me. It feels good sitting on the throne of my heart and I am loath to give it up. I have heard that this Child will become King, and I know that a King demands everything.  Look, I can give a little reverence or worship, I can give a little of my wealth, but I will not give everything. No, the Child must reside on the periphery of my life, or the Child must die!

The good news is (but its bad news for Mad Herod) that the Child will not die, not matter what I do. He was born in me with a promise and with tidings of great joy that he would be my savior.Try as I might, He will not die.  He may flee for a while, even to Egypt where I cannot find him, but he will return and when he does, he will be stronger.  He will keep his promise to me which he made to me at my baptism. He will be King of Kings and He is a jealous king who will have no rivals. I remember an old T-shirt that had this written on the front: “At the name of Jesus, every knee shall bow..”  Then on the back it read, “Count on it.” Word!

I should remember that Herod died a horrible death, eaten by worms. Someday, this fleshly body and my fleshly mind will also be food for worms. I would imagine that the first horror that King Herod faced as he left this world was the faces of the 14000 Holy Innocents. Not only would he realize the horror of his sin, he would also see that they were with the Child that he could not kill. Foolish Death. Where is your sting?

The Child will be King, not me. It’s inevitable. Death cannot kill life. So, if I had any sense, I would seek to kill the Mad Herod and let the innocents in me live. Or I can be worm food. Christ is born! Glorify Him! It’s a no-brainer, really! 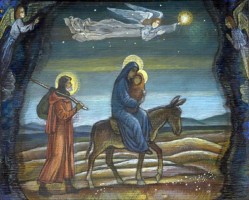 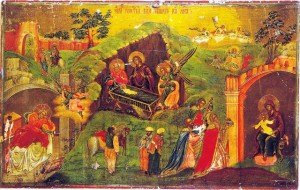