Source: Greek Orthodox Archdiocese of America.
The Mayor acknowledged and praised the contributions of Greek Americans to the City of New York saying that the Greek people had a huge impact in New York City and have helped to make it the great city it is today.
Natalya Mihailova | 05 April 2014
NEW YORK, Apr 3, 2014 – The Mayor of the City of New York Bill de Blasio welcomed today at Gracie Mansion His Eminence Archbishop Demetrios of America for the celebration of Greek Independence Day. Mayor De Blasio, continuing a long tradition, graciously hosted the annual reception for the Omogeneia to honor and celebrate the 193rd Anniversary of March 25, 1821, the start of the struggle for Greek Independence. 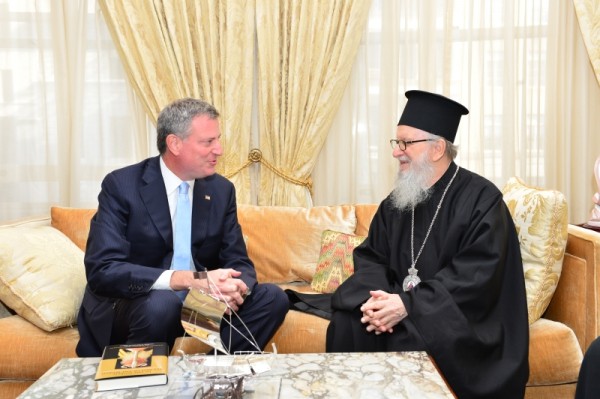 NEW YORK, Apr 3, 2014 – The Mayor of the City of New York Bill de Blasio welcomed today at Gracie Mansion His Eminence Archbishop Demetrios of America for the celebration of Greek Independence Day. Mayor De Blasio, continuing a long tradition, graciously hosted the annual reception for the Omogeneia to honor and celebrate the 193rd Anniversary of March 25, 1821, the start of the struggle for Greek Independence.

In his welcoming remarks, the Mayor acknowledged and praised the contributions of Greek Americans to the City of New York saying that the Greek people had a huge impact in New York City and have helped to make it the great city it is today. Mayor De Blasio noted that New York has the largest Greek population of any city in this whole continent and recounted the time of the Greek War of Independence of 1821, when New Yorkers had strongly supported the Greek freedom fighters. The Mayor said that the Greek immigrants of the last century have deeply enriched New York. “Greek people are synonymous with creativity, they are synonymous with an extraordinary work ethic and the ability to create where it seems impossible,” he said, and concluded: “You left your imprint in this City economically, culturally, politically and you have transformed us for the better.”

Following the remarks of the President of the Federation of Hellenic Societies of Greater New York, Mr. Elias Tsekerides, Mayor De Blasio introduced Archbishop Demetrios, recognizing His Eminence as the spiritual leader of the more than 500 Greek-Orthodox parishes across the United States and noting his leadership, his erudition, and his wonderfully accepting, embracing and inclusive personality.

Archbishop Demetrios started his remarks by saying that the Mayor should not be simply considered a Philhellene but a Hellene, since he shares in essence the universal and diachronic values of Hellenism. His Eminence thanked Mayor De Blasio for continuing this wonderful and well-established tradition and celebration and noted that “the heroes of 1821 believed strongly that history is not determined by blind forces, accidental chance or by inescapable fate… they believed that with the help of God they could determine the course of their own history and achieve what otherwise seemed impossible.” His Eminence said that the driving force for those who fought in 1821 and for us today was and is “the passion for freedom and independence, for justice and peaceful coexistence,  -which are- the most precious gifts of God.” Archbishop Demetrios underlined that the “great ideals of the universal Hellenic heritage” of freedom and independence “constitute absolute values, obtained with great efforts, sacrifices, courage and determination, and compassion for the fellow human being,” and said that the Mayor is a person “who strives to apply these to the complex demands of daily governance of this great City of New York, the Capital of the world.”

Mayor De Blasio presented a Mayoral proclamation for Greek Independence Day to Archbishop Demetrios and Elias Tsekerides. Some of the honored guests included the Permanent Representative of Greece to the United Nations Ambassador Michael Spinellis, the Consul of Greece Manos Koumbarakis, the Consul General of Cyprus Ambassador Vassilios Philipou, the Presidential Commissioner for Humanitarian Affairs of the Republic of Cyprus Katherine Clerides, New York State Senator Michael Giannaris, New York City Council Member Costas Constantinides and many other city and state government officials. Mayor De Blasio recognized especially his Director of Intergovernmental Affairs Ms. Emma Wolfe, “his Greek Secret weapon,” who is partly Greek-American from the side of her late grandmother Jenny Yannoula Spirounis. The Mayor also recognized warmly Fr. Alex Karloutsos who was present at the event.