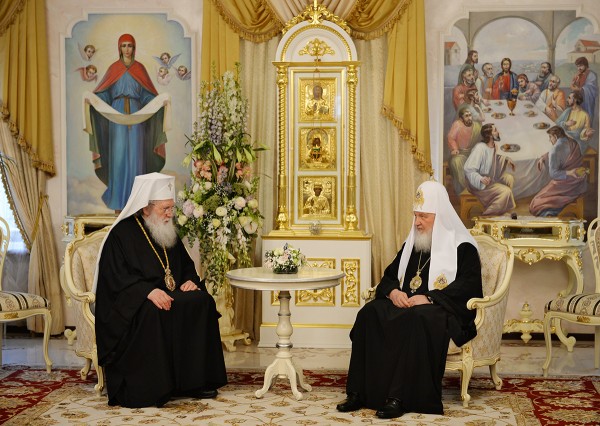 The Primate of the Bulgarian Orthodox Church was accompanied by Metropolitan Antonij of Western and Central Europe; Bishop Grigorij of Branitsa, vicar of the archdiocese of Sofia; Archimandrite Gerasim (Georgijev), general secretary of the Holy Synod of the Bulgarian Orthodox Church; Archimandrite Dionisij (Mishev), chairman of the church council of the Cathedral of St Alexander Nevsky in Sofia; Archimandrite Feoktist (Dimitrov), representative of the Patriarch of Bulgaria at the Patriarch of Moscow and All Russia; Mr. T. Atanasov, head of the Patriarchal Cabinet; Mr. A. Mladenov, executive secretary of the archdiocese of Sofia; Mr. Z. Kynev, technical secretary of the archdiocese of Sofia; and Ms A. Karamihaleva, head of the Synodal Public Relations Department.

The Primate of the Russian Orthodox Church cordially greeted His Holiness Patriarch Neofit and the members of the delegation accompanying him on his visit and said, in particular, “We have prayed together at the relics of the Holy Wonderworker Matrona of Moscow and glorified St Seraphim of Boguchar who is a figure uniting our Churches, for, belonging to the Russian people and the Russian Church, he devoted a considerable part of his life to Bulgaria, the Bulgarian people and the Bulgarian Orthodox Church.”

His Holiness Patriarch Neofit noted that the delegation of the Bulgarian Orthodox Church was pleased to take part in the celebrations commemorating the Blessed Matrona and in the glorification of St Seraphim of Boguchar. “After the celebrations in Sofia and after our pious people took part in the glorification of St Seraphim, we give thanks to God here, in the homeland of this saint of the Russian Orthodox Church, for having this great honour; we wholeheartedly thank you, Your Holiness, and your staff. We feel your love for us and your willingness to help.”

The high guest also expressed his gratitude for a particle of the holy relics of St Seraphim of Sarov been presented to the Bulgarian Orthodox Church.

During the meeting the Primates of the Russian and the Bulgarian Orthodox Churches discussed various issues on the pan-Orthodox agenda, including the preparation of the Pan-Orthodox Council, due to take place in Cyprus on the feast day of Pentecost this year.