Meeting of the Holy Synod of the Ukrainian Orthodox Church

Source: DECR
Natalya Mihailova | 03 April 2015
April 1, 2015 – The Synod of the Ukrainian Orthodox Church met for a regular session in the Synodal Hall of the Kiev Laura of the Caves. It was chaired by His Beatitude Onufry, Metropolitan of Kiev and All Ukraine. 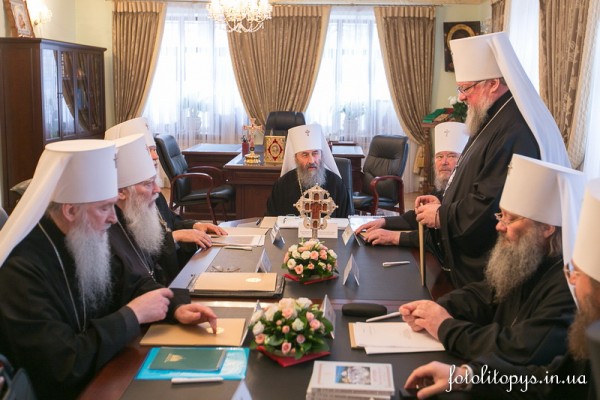 On the eve of the session, Metropolitan Lazar of Simferopol and Crimea celebrated the Divine Liturgy at the Laura’s church of the Conception of St Anna. After the liturgy, Metropolitan Onufry said the Prayer for the Dead at the grave of his predecessor on the See of Kiev, Metropolitan Vladimir (Sabodan) of eternal memory.

The Synod determined the membership of the organizing committee for the Millennium of St. Vladimir Equal-to-the-Apostles. It will be headed by Metropolitan Onufry of Kiev and All Ukraine. It also approved major events to take place during the celebrations.

It was decided to hold Prayers for the Dead and commemorative events on May 8 and 9, 2015, to mark the 70th anniversary of the Victory Day.

Having considered a report of the synodal department for social and humanitarian matters, the Holy Synod planned a number of measures for increasing humanitarian aid to victims of and displaced persons from the hostilities zone in south-eastern Ukraine.

Metropolitan Sergiy of Ternopol and Kremenets, Archbishop Yevlogy of Sumy and Akhtyrka, Bishop Philaret of Novaja Kakhovka and Genichsk, and Bishop Clement of Irpen were appointed judges of the Church Court headed by Metropolitan Feodor of Kamenets-Podolsk and Gorodok.

The Synod also made some legal, personnel and disciplinarian decisions concerning the internal life and structure of synodal departments, dioceses and monasteries of the Ukrainian Orthodox Church.

Photos by the UOC Press Service