Source: DECR
Natalya Mihailova | 19 May 2015
May 18, 2015 – The Ss Cyril and Methodius Institute of Post-Graduate Studies (CMI) hosted a meeting of the working group on the development of academic cooperation between the Russian Orthodox Church and the Coptic Church. 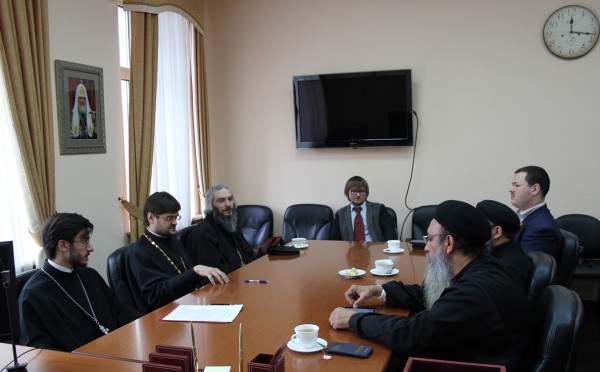 The questions under discussion included prospects for the development of cooperation in the academic area, particularly, the establishment of regular faculty and students exchange between the educational institutions of the two Churches. The meeting also discussed joint projects in Biblical theology and patrology to be implemented in academic conferences and experts’ meetings.

The meeting was held in pursuance of agreements concluded by Patriarch Kirill of Moscow and All Russia and the Coptic Patriarch Theodore II during the latter’s visit to Russia in October-November 2014 as well as the ROC Holy Synod decisions of May 5, 2015, on the establishment of a Bilateral Commission for dialogue between the two Churches. The Commission’s special groups are to develop cooperation in monastic, academic and media areas, in pilgrimage and exchange of experience in missionary ministry and social service, to coordinate efforts in opposing various manifestations of Christianophobia and defending traditional moral values and to promote theological dialogue.