Melkite Catholic Patriarch Gregory III: The EU Should Side with Damascus

Source: Notes on Arab Orthodoxy
Gregory III Lahham: We are Paying for the Mistakes of the EU and Obama
Melkite Catholic Patriarch Gregory III | 22 May 2015 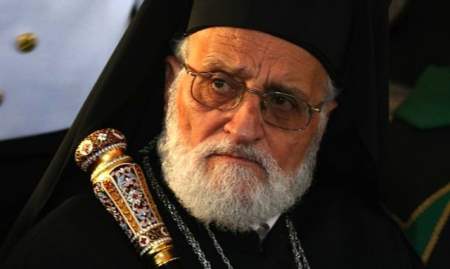 The Italian Episcopal Conference has decided to dedicate the Vigil of Pentecost on May 23 to “today’s martyrs”. That is, to the Christians who are persecuted throughout the world, a drama without geographical limits, even if it is particularly serious in areas of Syria and Iraq controlled by the Islamic State. After having killed or expelled thousands of Christians, Yezidis and other religious minorities, the Caliphate launched an offensive to conquer the Iraqi city of Ramadi. Yesterday Syrian Air Force fighters continued to bomb the suburbs of Palmyra, a Syrian city where violent clashes are taking place between the regular army and ISIS fighters. The ruins from the Greek and Roman periods make Palmyra one of the wonders of humanity, which are now at risk of disappearing if the city falls to the Islamic State. For Gregory III Lahham, a Syrian Catholic patriarch with his see in Damascus, “those who want to destroy the remains of Sumerian civilization, the historic site of Palmyra, and the Christian churches of Syria are not acting against this religion or that but against human values.”

On May 23 prayers will be held for all “today’s martyrs”. How is the situation of Christians in Syria?

The war that is taking place in Syria is a tragedy for everyone, since Christians and Muslims, Sunnis and Shi’ites, Druze and Yezidis are all under attack. The situation is particularly tragic in Aleppo, whose churches have all been destroyed or seriously damaged. The entire city has been turned into an enormous prison that is impossible to either enter or exit.

How is the situation in the capital and surrounding regions?

Damascus is not at risk of incursions on the ground but fears bombardments. The situation in Christian villages like Maaloula at the moment is calm. Currently, the battle is particularly violent around Palmyra and the North is also in danger.

Syria has been experiencing war for four years. How are Christians living during this period?

What can Western Christians do for their Syrian brothers?

There is need for material aid, so that the Syrian churches can be close to their faithful, especially the refugees. For example, my patriarchate in Damascus has to spend between 40 and 50 thousand dollars a month for refugees. But there is also a need for constant contact between the episcopal conferences of the major European countries and the local church in Syria.

I invite the Italian bishops to come and pray with us in Damascus because this would be a symbolic gesture of enormous value. Moreover, helping the Christians means working for peace. The Catholic Church, the Orthodox Church, the Oriental churches, the Anglicans and the Protestants should sign a declaration for peace in Syria, in Iraq and in Palestine.

How do you assess the advances of ISIS in Palmyra and Ramadi?

This is a question that should be addressed to a general, not to me. War is war, it goes back and forth. ISIS is strong insofar as it is supported by so many countries, whether Arab or European. The United States should be more serious and help the Syrian government.

Syria is a nation, not a regime. I do not understand why Washington aids the so-called “moderate” rebel factions, which are made moderate, so to speak. Today we should all recognize that we have no alternative. This Syrian opposition is divided and corrupt and therefore it is useless to aid an element that is so weak, because this makes more victims among the Syrian population.

What do you mean when you state the ISIS is aided by European countries?

We know that every day there are young Italians, English and French who are leaving for Syria with the intention of joining the ranks of fundamentalist groups. I would not call these organizations Islamic because they are purely military groups. It is not a war between Islam and Christianity, but rather a struggle for human values. those who want to destroy the remains of Sumerian civilization, the historic site of Palmyra, and the Christian churches of Syria are not acting against this religion or that but against human values.

What responsibilities do European states have for the young people who are joining ISIS?

The point is that the European Union lacks a single position and is not working seriously for peace in the Middle East. The EU is indecisive and is not taking effective steps to end the war. If the 28 countries had a single strong position, it would be possible to put an end to ISIS’ influence in the Middle East. The Arab world is divided because Europe is divided. The most effective bulwark against ISIS is the Syrian state and therefore if the EU clearly sided with Damascus, it could truly contribute to putting an end to ISIS. There should be a common declaration of the EU in support of the Syrian government.