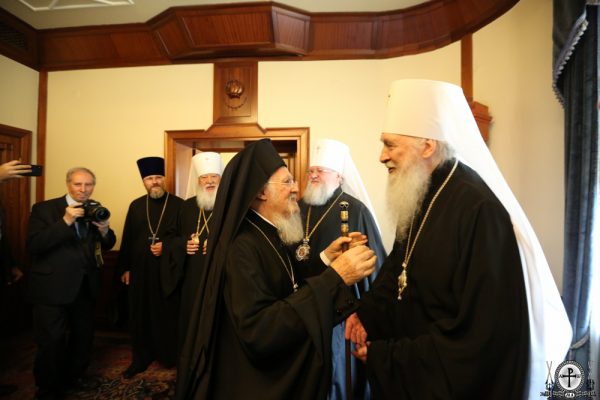 On June 23, 2018, permanent members of the Synod of the Ukrainian Orthodox Church, Metropolitans Agafangel of Odessa and Ismail, Ilarion of Donetsk and Mariupol, Feodor of Kamanets-Podolskiy and Gorodok, and Antoniy of Borispol and Brovary, UOK chancellor, met with His Holiness Bartholomew, Patriarch of Constantinople, at his residence in Istanbul.

In his comments to the mass media concerning the results of the meeting, Metropolitan Emmanuel of France called it ‘a blessed moment’, noting ‘a very useful and constructive cooperation’ in the course of the meeting. He also expressed hope for ‘future cooperation and continued dialogue with all fellow- representatives of the Ukrainian Church’.

According to Metropolitan Antoniy of Borispol and Brovary,

‘the aim of the meeting was to bring objective information about the problems facing Ukrainian Orthodoxy and to hear from the Patriarch himself what is lively discussed in the mass media, namely, about an alleged desire of His Holiness Patriarch Bartholomew to grant a Tomos of autocephaly at an early date’.

‘It was a long and frank meeting’ he said, ‘each explained his own vision of the situation in Ukraine and not only in it, because schisms exist not only in the Ukrainian Orthodox Church by also in many Local Orthodox Churches, and we should search for ways which can heal the schism’. Metropolitan Antoniy pointed to the agreement reached by the parties concerning ‘the impossibility of legalizing the schism’ in Ukraine and also to the need to heal it.

‘We will search for a solution on the basis of our canon rules’, Metropolitan Antoniy underscored, ‘not by ways talked about by our mass media and some high-ranking people alleging that the matter has already been settled. Nobody knows how this problem may be solved since it is very complicated, but we should do everything possible to bring our brothers and compatriots who are in the schism back to the fold of the Orthodox Church’. 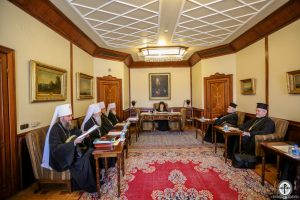 Metropolitan Antoniy emphasized that a solution for healing the schism should be such ‘that we, in settling the schism, should avoid creating new divisions, or even drive a part of the faithful into catacombs. We also said to the Patriarch of Constantinople that if a parallel canonical structure should come into existence in Ukraine, then we would have to forget about a one Local Orthodox Church in Ukraine not in the nearest future but altogether’.

The guests conveyed to His Holiness Patriarch Bartholomew an invitation from His Beatitude Onufriy, Metropolitan of Kiev and All Ukraine, to send a representative to Kiev for the 1030th anniversary of the Baptism of Rus’.