Source: Pravmir.ru
Natalya Mihailova | 14 November 2014
November 12, 2014. A memorial service for Fyodor Dostoevsky, the genius of the Russian language, took place at the Vladimirskaya Cathedral in St. Petersburg on November 11, the 193rd anniversary of his birth. 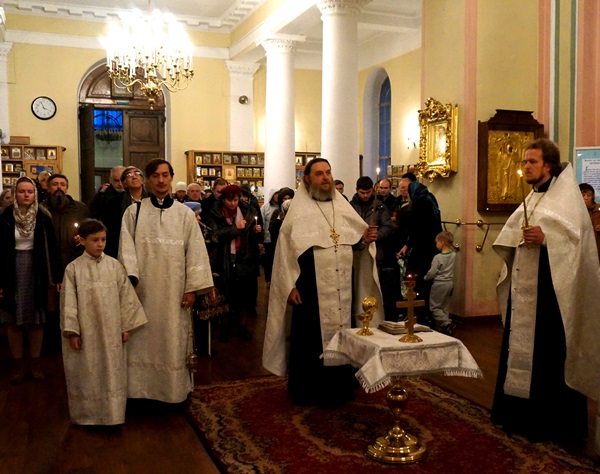 The Blagovest-Info website has reported that the memorial service was chaired by Archpriest Gennady Belovolov, the research scientist of the Dostoevsky Apartment Museum, with Priest Alexander Prokofiev, a cleric of the church, concelebrating.

In his speech, Father Gennady stressed the relevance of Dostoevsky’s writings and the importance of his personality for modern people. He noted that the birthday of the national genius is a nationwide holiday every single year.

“Dostoevsky is the conscience of both our and any other times. Many people fight for justice at this momentous year for Russia, when there is bloodshed in the neighboring country, which is in fact the Russian land too. Fyodor Mikhailovich believed that the level of people’s morality should be judged by the great thirst for justice,” the priest pointed out.

“Today, when ideals promoted by Dostoevsky are being mocked at and corroded, is the perfect time to remember his words: ‘How often a Russian laughs at something that he should cry over’,” Father Gennady reminded.

Present at the service were scientists, who gathered at the memorial apartment museum of the writer on these commemoration days and will attend annual international readings dedicated to the writer’s life and works. Among the praying people was a great-grandson of the writer, Dmitry Dostoevsky.

Memorial services for Dostoevsky have been held in St. Petersburg since the 80s. It has become a church and cultural tradition of the Northern capital to pray at the spiritual house of Dostoevsky, the church that the writer had attended.