Message of the ROC Holy Synod on the Coronavirus Infection 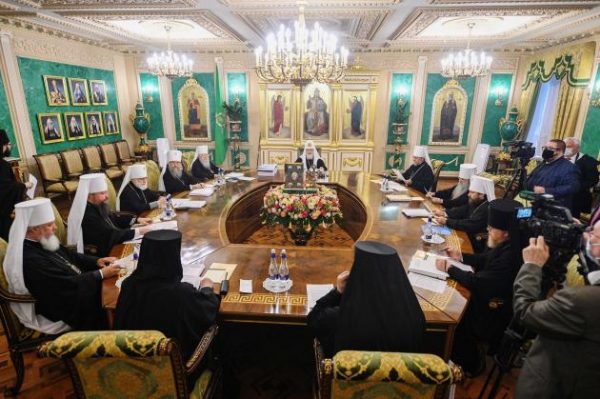 The Holy Synod of the Russian Orthodox Church issued a message to the episcopate, clergy, monastics and laity on the invasion of a harmful infection this year, reports the ROC Department for External Church Relations:

Praising Merciful God Who causes his sun to rise on the evil and the good, and sends rain on the righteous and the unrighteous (Mt. 5:45), the Church is ardently praying for the final deliverance of people from the harmful infection that has invaded us this year. The Holy Synod has called upon the bishops, priests, monastics and lay people not to weaken in this prayer and asked the Almighty God to grant His help to all those who are working to overcome the misfortune that has befallen the world. The sacred duty of Orthodox Christians is also to pray for the repose of those who died from the coronavirus infection and its consequences. It is with special grateful love that we will remember those clergy and laity, especially medical doctors, who, in fulfilling their duty to the end, according to the Gospel, laid down their life for their friends (cf. Jn. 15:13).

Reflecting on the causes of the disaster that has visited us, we should preserve Christian sanity, discretion and good sense. True, sorrows that often visit individuals and whole nations sometimes may be a result of human communities’ rejection of God’s protection. According to St. Paul, the first cause of every disaster that befalls the creation is the Fall as a result of which “the whole creation has been groaning right up to the present time” (Rom. 8:22). However, it is wrong to believe that human suffering is definitely linked with individual sin. “Those eighteen who died when the tower in Siloam fell on them—do you think they were more guilty than all the others living in Jerusalem?- these are the words with which the Saviour responded to the news about a disaster that befell the Holy City (Lk. 13:4), reminding them that God-given destinies are often concealed from us until the right time. The apostle warns us against rash and immature judgements, which almost always lead to some people’s haughty accusation of others and calls Christians to await humbly the full revelation of God-given destinies on the day of the Second Coming of Christ: “Therefore judge nothing before the appointed time; wait until the Lord comes. He will bring to light what is hidden in darkness and will expose the motives of the heart. At that time each will receive their praise from God” (1 Cor. 4:5).

Nevertheless, every crisis arising in human history makes it possible for us to evaluate anew our customary way of life and to re-think the motivation of our actions. Let everyone who bears the name of Christ harken to the words of St. Ignatius the God-Bearer: “We ought to bear all things for the sake of God that He also may bear with us. Be ever becoming more zealous than what you are. Weigh carefully the times. Look for Him who is above all time, eternal and invisible, yet who became visible for our sakes; impalpable and impassible, yet who became passible on our account; and who in every kind of way suffered for our sakes” (Epistle to Polycarp, Ch. 3).

We can see how fragile and unreliable is comfort cherished by the modern civilization. Enjoying the gifts of God’s mercy and prosperity sent down by the Creator, regrettably we are inclined to carelessness. To a great extent, the events of this year are evidence to this carelessness. How untenable human conceit tends to be!

It is gratifying to see that in the situation of an epidemic most faithful of our Church have proved to be worthy of being called disciples of the Lord Jesus by preserving with big-hearted patience their commitment to the Gospel’s truth, taking care of those who are near and those who are far, just as it befits those who fulfil the law of Christ to carry each other’s burdens (Gal. 6:2). The pastors and faithful of our Church understood: one’s careless attitude to one’s health, which may seem to be a private affair of every person, in these days can turn out to be other people’s suffering and death. Many Orthodox Christians have preferred responsibility for the life and health of their neighbors to imprudence and self-assurance. They have fearlessly fulfilled their duty ignoring their own wishes and habitual way of life and realizing that the precautions they take in no way belittle our faith in the effectiveness of Divine Providence and sacredness of the Church’s sacraments, the most important of them being the Sacrament of the Body and Blood of Christ.

A special test for Orthodox Christians was the limited access of lay people to participation in public worship and even the impossibility for them to come to church. This circumstance compels us to think again over the importance that church worship and common prayer of the disciples of Christ have in our life. We should cherish this gift of the Lord and value each possibility to come under the sacred protection of the house of God. True, the celebration of the Divine Liturgy in churches did not stop even in the absence of most of the flock. True, the broadcast of the worship services in the internet or on television and publication of the liturgical orders could relieve to an extent the burdens of the permanent stay of Orthodox Christians in their homes and became for them a consolation. However, according to many, the feat of a lone prayer at home proved to be not an easy action. Evidently, broadcasting in no way can replace the personal participation in a worship service, to say nothing of the fact that technical means do not provide an opportunity for the participation of a Christian in most of the sacraments of the Church, especially in the Divine Eucharist as the most important of them. The personal presence of the apostles in the upper room of the Last Supper is the irrevocable gospel’s norm of remembrance about the life-giving death of Christ and the confession of His Resurrection in the sacrament of His Body and Blood. We can never and in no way forget this norm.

The considerably limited participation of people in worship service was unprecedented for our episcopate, clergy and laity in their personal experience. Realizing that the new threat facing humanity could involve grave consequences that hardly could have been fully predicted and aware of her responsibility for the life and health of innumerable people, the Church shared people’s burdens generated by the spread of the harmful infection and called upon her faithful to refrain for a while from their habitual way of participating in the liturgical life. However, this decision adopted as it was in an extraordinary historical situation, cannot become a new norm. The freedom of conscience and freedom of faith, including the right of believers to participate in worship services even in exceptional situations should remain unshakable.

The concern of many Christians as well as people of various other beliefs for a possibility of further application of the methods used during the epidemic to ensure the necessary decrease in the intensity of personal contacts between people seems to be justified to a considerable extent. The use of digital identifiers, the automated decision-making that can involve the deprivation of individuals and whole communities of their rights, the broad collection of personal data including information about health and the processing of this data – all this demands control on the part of society, including the Church as a public institution. The Bishops’ Councils of our Church, in particular the 2013 Bishops’ Council, have repeatedly pointed to possible dangers involved in the development of technologies for recording and processing personal data.

Looking back at the past months, we underscore that no polyphony of opinions, news and rumours and differences of opinions inevitable in the modern world should tear apart Christ’s robe – His Church. Reflections on the causes of particular events in the world, joyful or sorrowful, and discussions between Christians presuppose not an exchange of claims, not setting off some against others, the less so the sawing of enmity and schism but rather mutual assistance, joint search for the way of action for the Church and her faithful in a given situation, readiness to hear and understand each other and especially to hear the conciliar voice of the Church.

The anti-epidemic measures defined by the Holy Synod should be observed further as well with reference to local situations. Attention should also be given to the resumption of studies in church educational institutions and Sunday schools while the beginning of the academic year can be put off in particular cases subject to ruling bishops’ decision depending on the epidemic situation and with due consideration for the decisions of state authorities with regard to the beginning of the academic year in secular educational institutions.

We pray for the repose of the souls of all those who did not survive the disease and its consequences. We thank the most reverend archpastors, the clergy and laity who in these not easy days have not abandoned their work for the glory of the Triune God. May the Lord reward all of you for your zealous work to glorify His Holy Name, for your love for His Church, for your divine worship, for your effective help to your neighbours? We send special words of gratitude to medical and social workers, staff members of law-enforcement bodies, municipal civil servants, utility workers, volunteers and our many other brothers and sisters who worked to relieve the suffering of the ill and took care of those who could not take care of themselves.

May God’s blessing be with all of us!