Met. Onuphry: The Lord Gives us to Drink the Cup of Sorrow, and we Humbly Drink it 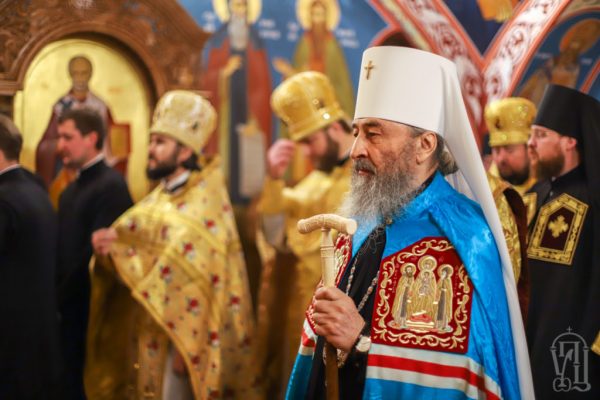 Despite all the trials that have come to the Orthodox Church, it will remain unbreakable forever, His Beatitude Metropolitan Onuphry of Kiev and All Ukraine wrote in a recent letter to His Eminence Metropolitan Hilarion, the First Hierarch of the Russian Orthodox Church Outside of Russia (ROCOR).

The primate of the Ukrainian Church wrote to the primate of ROCOR to offer his sincere gratitude for the latter’s prayers and support during the former’s time of trials and persecution.

“The holy canonical Ukrainian Orthodox Church and the God-loving Ukrainian people are experiencing one of the most difficult periods in its history,” Met. Onuphry writes.

To our great sorrow, as a result of the ongoing military hostilities in eastern Ukraine, the constant threat of the Verkhovna Rada adopting a number of anti-Church laws, and especially as a result of the anti-canonical interference of the Patriarchate of Constantinople in the internal life of our holy Ukrainian Orthodox Church, some spiritual chaos has formed in the religious life in Ukraine, in which are violated not only the rights of religious freedom, but also the constitutional rights of every believer.

According to Met. Onuphry, brotherly love and spiritual empathy on the part of ROCOR warm the hearts of Orthodox Ukrainians and strengthens them in the hope of God’s mercy.

“We are grateful to God for all that the Lord allows us. The Lord gives us to drink the cup of sorrow, and we drink it with humility and gratitude to God. We believe that, in spite of all the trials that have been permitted to us, the Church of Christ will remain unbreakable forever and the gates of hell will not overcome it,” the Ukrainian primate writes.

In conclusion, he calls upon Met. Hilarion “not to abandon his fervent prayers for the canonical Ukrainian Orthodox Church and its faithful children, for peace in the Ukrainian state, as well as for the multiplication of love in the hearts of Ukrainians.”