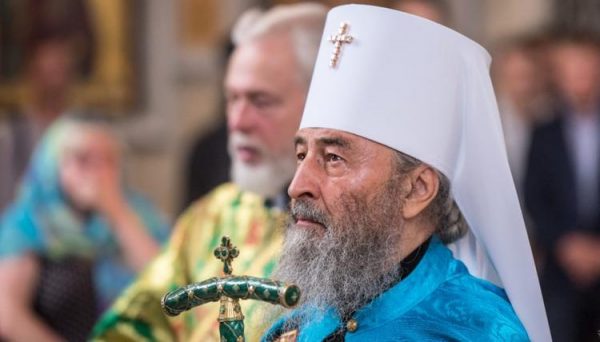 The negative consequences of Constantinople’s interference in Ukrainian Orthodoxy are continuing to unravel, and are taking on a more violent character, of which many within the Ukrainian and Russian Orthodox Churches have repeatedly warned, to the scorn of those who support the granting of autocephaly to Ukrainian schismatics.

Now His Beatitude Metropolitan Onuphry of Kiev and All Ukraine, Primate of the canonical Ukrainian Orthodox Church, has become the target of online threats, including death threats, from Ukrainian schismatic-radicals.

As the Union of Orthodox Journalists reports, Met. Onuphry has now been added to the Mirotvorets (“Peacemaker”) database that collects information on anyone deemed to be an enemy of Ukraine or a threat to national security.

OrthoChristian reported just two days ago that His Eminence Metropolitan Paul of Vyshogorod and Chernobyl, the abbot of the Kiev Caves Lavra, was added to the site after he warned of attacks being planned against the Lavra. His Eminence Metropolitan Vladimir of Pochaev, the abbot of the Pochaev Lavra, was also added to the database earlier this year.

The site is known to publish personal information of its “enemies,” and some of those people have been known to wind up dead. Site founder George Tuka responded to the murder of Ukrainian author Oles Buzina and former Verkhovna Rada Deputy Oleg Kalashnikov just days after the site published their home addresses in April 2015 by saying, “This site contains data on more than 25,000 men. More than 300 of them are either arrested or killed. So why should I worry about some two lowlifes who are guilty of war?”

Clergy of the UOC previously included in the site’s database have also received threats.

Thus, the inclusion of Met. Onuphry and several other bishops in the Mirotvorets database is no game, and no laughing matter.

Moreover, the site is in fact a Ukrainian government site. While it declares itself to be an independent NGO, it isn’t hard to establish the many links. The site was launched in December 2014 by politician and activist George Tuka, as he announced on his Facebook page. Tuka served as the governor of the Lugansk Province from 2015-2016, and has served as Deputy Minister for the Ukrainian Ministry of Temporarily Occupied Territories and IDPs since April 2016.

“Patriarch” Philaret of the schismatic “Kiev Patriarchate” congratulated and “blessed” the team behind the site on Counter-Intelligence Day, December 27, 2017, bestowing a medal “For the sacrifice and love for Ukraine” upon them.

Met. Onuphry was added to the site yesterday as an “Agent of the influence of the Russian Orthodox Church (ROC) in Ukraine,” and an “Opponent of the creation of an independent Local Church in Ukraine,” with information about the Ukrainian Holy Synod’s call for Constantinople to cease interfering in its canonical territory.

Moreover, the Mirotvorets Facebook page made an announcement yesterday referring to these bishops as “mongrels” and “demons in cassocks.”

The announcement also includes a not-so subtle warning: “We advise all of them to leave Ukraine before it’s too late. These schismatics and anti-Ukrainians can’t say then that they weren’t warned.”

His Holiness Patriarch Irinej of Serbia was also added to the database in late May after he asserted that all those who help the Ukrainian schismatics are enemies of all Slavic peoples and all Orthodox Christians.

Even Roger Waters, the legendary bassist for Pink Floyd, is considered a threat to Ukrainian national security. He was added by Mirotvorets last month for “propaganda against Ukraine, attempts to infringe on Ukraine’s territorial integrity and participation in attempts to legalize Russia’s annexation of Crimea.”

In another, even more direct threat, a fake Facebook page of the “Ukrainian Local Orthodox Church” has posted a note that Met. Onuphry may die at the hands of Ukrainian nationalists. The publication itself of course blames Russia for the rumor, saying it is an attempt to further aggravate the situation in Ukraine and open the door for Russia to supposedly sweep in and save the Orthodox population from nationalists.

“Therefore, Mr. Onuphry, we ask you to be careful. Take a close look at those around you; perhaps there are those among them capable of such a godless act,” the post reads, thus laying the groundwork for any harm brought to Met. Onuphry to be blamed on his fellow Churchmen.

Political expert Vyacheslav Pikhovshek spoke of the post on a Ukrainian news program, calling it a blatant and obvious threat to His Beatitude Metropolitan Onuphry, reports the Union of Orthodox Journalists.

“Someone is clearly suggesting that His Beatitude is in danger. It’s a very dangerous situation,” Pikhovshek said.

Nationalist groups in Ukraine, such as C-14 and Right Sector, are already well known for violently taking over canonical parishes and physically attacking clergy, laity, churches, and monasteries.