Source: DECR
Natalya Mihailova | 01 July 2014
On 28 June 2014, Metropolitan Hilarion of Volokolamsk, chairman of the Moscow Patriarchate’s Department for External Church Relations, arrived in Bryansk with the blessing of His Holiness Patriarch Kirill of Moscow and All Russia to take part in the opening of the “Slavonic Unity-2014” International festival. 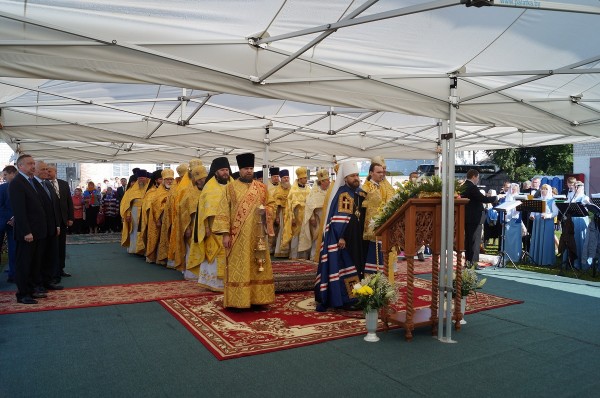 The Divine Liturgy was celebrated in the square before the Church of the Assumption in the town of Klimov, Bryansk region, by Metropolitan Hilarion together with the assembly of bishops, clerics of the Klintsy and other dioceses located in border area of Russia, Ukraine and Belarus.

Attending the divine service were Alexander Beglov, presidential envoy in the Central Federal District; Grigory Rapota, State Secretary of the Union State of Russia and Belarus, Nikolai Denin, Governor of the Bryansk region; other officials, and lay persons from the Bryansk and Gomel regions.

After the Liturgy, Metropolitan Hilarion addressed the worshippers with archpastoral homily, in which underscored that all pray for the cessation of the internecine strife and the triumph of peace in Ukraine.

Russian Premier Minister Medvedev sent a cable in which he called the festival a memorable event in the cultural life of different countries.

Metropolitan Hilarion brought greetings from His Holiness Patriarch Kirill of Moscow and All Russia, who ardently prays for the unity of the three fraternal nations. The DECR chairman reminded the audience that this year marks the 700th birthday of a great Russian saint, Sty. Sergius of Radonezh, who taught the monks and all people that our strength was in unity.

Metropolitan Hilarion and members of official delegation of Belarus and Russia visited the “Slavonic circle chain” festival forum, exhibitions of applied art and an exhibition dedicated to the 70thanniversary of the Bryansk region’s formation which introduces visitors to the history of the land of Bryansk. Governor of the Bryansk region gave a reception on the occasion of the opening of the festival.