Source: DECR
Natalya Mihailova | 16 January 2016
On January 12, 2016, Metropolitan Alexander of Riga and All Latvia met with President of the Republic of Latvia Raimonds Vejonis, at the St Sergius Convent of the Holy Trinity in Riga. 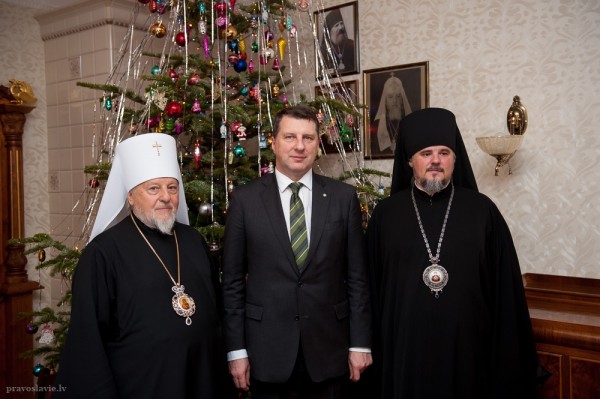 According to the longstanding tradition observed during Christmastide, the head of the state pays a visit to the Metropolitan of Riga to extend Christmas greetings to him and, in his person, to all the Orthodox faithful in the country. It was the first official visit made by Mr. Vejnis to the Primate of the Latvian Orthodox Church since his taking the office of the President of Latvia.

Participating in the meeting were also Bishop Alexander of Daugavpils and Rezekne, Archimandrite John (Sichevsky), secretary of the Synod of the Latvian Orthodox Church; Archpriest Nikolay Tikhomirov, rector of the church of the Holy Trinity in Zadvin; Sister Magdalina (Polyn), mother superior of the St Sergius Convent of the Holy Trinity in Riga; Mr. Guntis Pukitis, head of the Presidential Chancery, and Ms Egita Kazeka, deputy head of the Presidential Chancery.

The President of Latvia thanked Metropolitan Alexander and all the Orthodox faithful in Latvia for the spiritual mission carried out by the Latvian Orthodox Church and for its successful cooperation with all the traditional Christian confessions in the country.