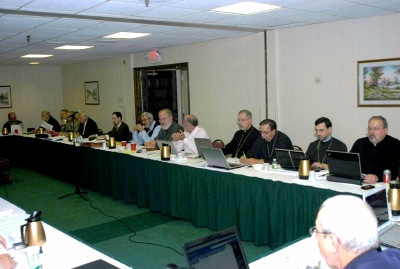 According to Archpriest Eric G. Tosi, OCA Secretary, His Beatitude, Metropolitan Tikhon, will offer the opening address and report, followed by reports from the officers of the Church.  Detailed plans for the forthcoming 18th All-American Council [AAC], slated to convene in Atlanta, GA July 20-24, 2015, also will be discussed.  A final draft of the proposed AAC agenda will be reviewed and submitted to the Holy Synod of Bishops for final approval.

Additional agenda items include the presentation of a draft of the OCA Statute by members of the Statute Revision Committee.  The draft will be reviewed and revised accordingly before it is released to the Church for general input and presentation at the AAC.

Reports also will be heard from the Archive Committee, IT specialist Ryan Platte, and the OCA’s other committees and departments.  Presentations will be made by the Fellowship of Orthodox Christians in America and the Philadelphia-based Russian Brotherhood Organization.

Finally, a comprehensive review of initial plans for financial proposals slated to be presented at the AAC will be undertaken.

On Thursday, the new Lesser Synod of Bishops will meet to review plans for the Spring Session of the Holy Synod in March.

Minutes and reports from the meeting will be posted as they are received.