Source: DECR
Natalya Mihailova | 18 September 2014
On September 16, 2014, participants in the 13th session of the Joint Commission for Theological Dialogue Between the Orthodox and the Roman Catholic Churches gathered together at Amman, Jordan. 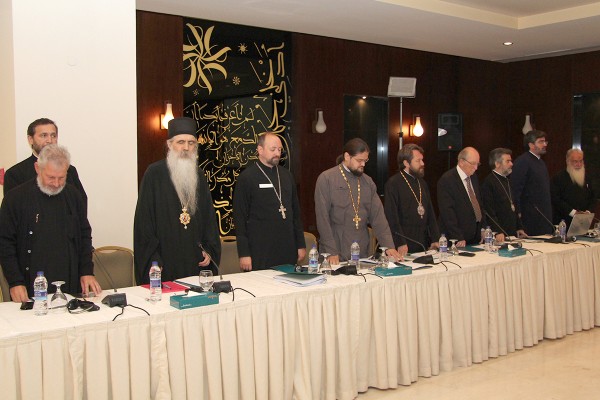 In compliance with the Russian Orthodox Church Holy Synod decision of July 25, 2014, the Moscow Patriarchate is represented at the meeting by a delegation including Metropolitan Hilarion of Volokolamsk, chairman of the Department for External Church Relations (head of the delegation), Hieromonk Stephan (Igumnov), DECR secretary for inter-Christian relations, and Rev. Alexy Dikarev, staff member of the secretariat for inter-Christian relation.

In the evening of September 14, the Moscow Patriarchate delegation arrived at the Amman airport and was met there by Russian Ambassador B. Bolotin and the head of the Russian Ecclesiastical Mission in Jerusalem, Hegumen Feofan (Lukyanov).

On September 15, the DECR chairman and his delegation visited the ancient city of Petra in southern Jordan known from the Old Testament and early Christian history. The delegation prayed in Petra’s former cathedral dedicated to the holy Prophet Aaron and on the ruins of the church erected in the 5thcentury and dedicated to the Mother of God. On the same day, the DECR chairman met with several delegates of Local Orthodox Church who came to Amman.

The first day of the session, September 16, according to the dialogue procedure, was allocated for a separate meeting of the Orthodox participants for them to work out an agreed stand on the draft document “Synodality and Primacy”. Metropolitan Hilarion presented the Russian Orthodox Church’s point of view based on the document “The Position of the Moscow Patriarchate on Primacy in the Universal Church”, which was adopted by the Holy Synod on December 25, 2013.

Most viewed articles
Metropolitan Hilarion: The unity between the Ukrainian Orthodox Church and the Russian Orthodox Church is preserved263
How to Get Rid of Spiritual Infantilism?113
How to Respond to Opposition to the Gospel110
A Piece of Rock Falls Down on the Skete of St. Anna on Mt. Athos94
Three Words82
His Beatitude Metropolitan Tikhon Issues Statement on Tragic School Shooting in Texas74
Romanian priests in Madrid draw conclusions on the benefit of praying together with family members57
test1
Most popular authors
Metropolitan Hilarion (Alfeyev)263
Priest Andrei Chizhenko113
Archpriest Basil Ross Aden110
Pravmir.com team94
Archpriest Geoffrey Korz82
Metropolitan Tikhon of All America and Canada74
Aurelian Iftimiu57
Maria Trushanina1