The Church has all the necessary things to make a person happy in this life and to prepare him or her for moving to the future life.
Natalya Mihailova | 11 April 2014
On April 9, 2014, Metropolitan Hilarion of Volokolamsk, head of the Moscow Patriarchate’s department for external church relations, administered the rite of reuniting those who temporarily fell away from the Orthodox Church by diverting into various false teachings and sects, at the church of Our Lady the Joy to All the Afflicted-in-Bolshaya Ordynka. 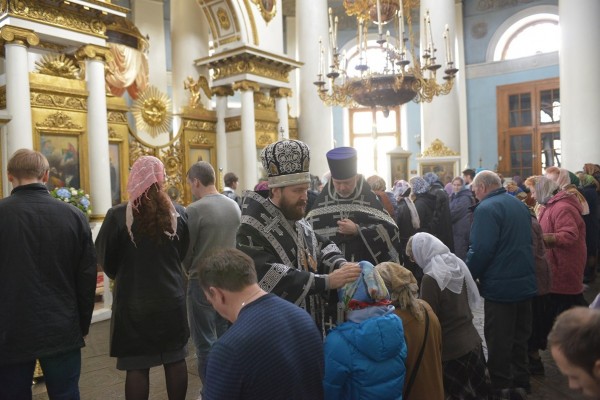 The rite of reunification is administered in this church twice a year. On April 9, fifty four people renounced heathenism, sectarian delusions and schismatic false belief by pledging on the Gospel allegiance to the Church. After the oath, Metropolitan Hilarion laid his homophor on the head of each of those who reunited with the Church.

In his word of instruction, Metropolitan Hilarion noted in particular.

“Today the Lord has brought you back to the Holy Church – the Church to which you were once brought by God through the Sacrament of Holy Baptism, from which you fell away through delusions and to which you have returned today through repentance”.

Speaking about the life in the Church, he said,

“The Church has all the necessary things to make a person happy in this life and to prepare him or her for moving to the future life. Only non-believers and those who have little faith think about life as if it were a space of time in which one should take as much as possible of everything and what will await them after death, if any at all, is unknown. This is often said by those who believe one should not think about death at all but should think first of all about material wealth and success. There are also those who, aware that everyone has an inherent religious feeling and that the human soul has an instinctive longing for God, teach all kinds of falsehood, false doctrines, and superstition instead of teaching people the truth. And the evil of the latter is greater than that of the former (cf. 2 Kings 13:16).

“It is only the true Church – which is the guardian of true teachings, which was created by the Lord Jesus Christ Himself and His apostles, which is led today by successors of the apostles and in which the Holy Spirit continues working – that represents the Noah’s Arch in which we make our journey together to the Heavenly Kingdom. The Lord Himself is our Pastor who leads His ninety nine sheep who have not been lost but takes special care through His priests for those sheep who went astray…

“Let us bear together this light burden of the Lord, let us bear each other’s burdens, remembering that we have come to the Church not only because the Lord has brought each of us here but also for us to support one another and pray for one another”.

The work with people who fell away from Orthodoxy is carried out in the church of Our Lady the Joy to All the Afflicted by the A. Khomyakov Rehabilitation Center for victims of non-traditional religions. The center is directed by the Rev. Yevgeny Tremaskin. Before the rite of reunion, preparatory talks are held for several months with sectarians and schismatics who wish to renounce their delusions and return to the true faith.