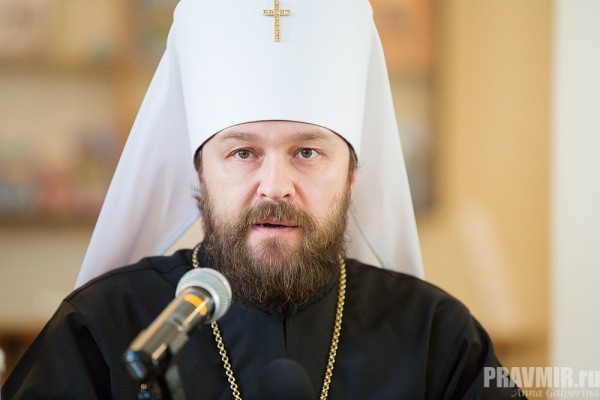 – Your Eminence, what are your thoughts in general about the Holy and Great Synod which will be convened in Crete, Greece next month?

Over the last thousand years Councils have been convened on many occasions which to a larger or lesser degree we can call Pan-Orthodox since they were attended by representatives of the various Local Churches. We can include among them, for example, the Council of Constantinople of 1593 which established Patriarchal governance in the Russian Church, and several other Councils. The Holy and Great Council planned for June of this year on the island of Crete ought to be the most wide-ranging and representative of them. It was been in direct preparation for more than half a century. These two circumstances mean that the forthcoming Council should become a historical event. I participated in all of the pre-Conciliar events since the pre-Conciliar process was renewed in 2008 after a lengthy break and I know how difficult it was at times to come to a pan-Orthodox agreement on the important issues of the Council’s preparation. The fact that we managed to reach unanimity on the more important of these issues is a great achievement, and in this regard I have a sense of joy and satisfaction. At the same time I would like to draw attention to the fact that the unity and unanimity, which, God willing, we will bear witness to at the Council, is not the end, but the rather the beginning of joint labours on the path to deepening fraternal co-operation between the Local Churches and the strengthening of pan-Orthodox unity. The successful holding of the Holy and Great Council is the joint capital which we are to increase and not waste, and a great responsibility for this rests upon us.

– What is the significance for the Synod for the Orthodox Church as a whole and also for the Church of Russia in particular since this is the first time that she will participate in such a Synod?

The Holy and Great Council is a Council of the whole Orthodox Church, and therefore I would not say that its significance is any different for the Russian Church than for the other Local Churches. First of all, the fact that it is being held is an confirmation of our ecclesiology, it bears witness to us and the whole world that the Orthodox Church is a Catholic Church, that the principle of conciliarity that has always been her distinguishing feature is not an inheritance of the past, but a reality for our time. The Pan-Orthodox Council is also a visible expression of the unity of our Church, testimony that, in spite of the different political conditions in which the Local Churches live, we are capable of achieving unanimity on the issues that are most important to us, since together we comprise the one Church. I believe it to be exceptionally important that the outward image of the Church serves these aims so that it becomes an exact reflection of the Orthodox ecclesiology by which all the Orthodox Churches, independent of their how ancient their origins or number of the faithful, are equal members of the body of the Universal Church.

– What do you anticipate to come out of the Synod that concerns the Orthodox faithful of the 21st century?

As is well known, the Holy and Great Council, according to its schedule , will not examine any other topics other than those that have been put on the agenda and the already published six drafts of the conciliar documents. The sole exception is the Encyclical of the Council, the draft of which still has to be finalized. If we look at the documents on the agenda, then the most relevant, in my opinion, is the draft document entitled ‘The Mission of the Orthodox Church in the Contemporary World’. It gives the Church’s view on the many challenges of the modern-day world, the problems of the economic crisis, on what the Church thinks of the problem of discrimination and military conflicts. Many of these problems in their present form arose in our time and are to one degree or another relevant for Orthodox Christians of both East and West. At the same time, this is one of the documents which has attracted criticism within a number of the Local Churches.

– What do you say to those hierarchs, monastics and priests – in Greece – who oppose the convening of the Synod? Do you have similar cases in your Church in Russia?

I know that in the Orthodox Church of Greece, as in the other Local Churches, there is a critical attitude on the part of some of the episcopate, clergy and laity towards the Council, to the way it has being prepared and held and to some of its draft documents. I will not evaluate this criticism here. For my part, it would be wrong to interfere in the internal life of another Local Church. I can only say that among the bishops, clerics and laity of the Russian Church there is also a critical attitude towards the Holy and Great Council. I believe that criticism of the conciliar documents, if it is constructive and founded, is completely normal. This is why the draft documents were published, so that every interested member of the Church can have his say on them. Moreover, I believe that the more important critical remarks should certainly be taken into account and the corresponding amendments should be made in the documents when they are discussed at the Council. This is vital if we want the conciliar documents to be accepted so that as a result they will not be later rejected by the people of God. It is only through this acceptance that we can judge whether this great event has been successful or otherwise, for, as the Encyclical of the Eastern Patriarchs of 1848 states, ‘the guardian of piety is the body of the Church herself, even the people themselves, who desire their religious worship to be ever unchanged and of the same kind as that of their fathers’.

– Could the Synod discuss issues such as the following: a) The second marriage of a priest after his wife’s death or even divorce? b) The rediscovery of the ancient tradition of the Church of married bishops? c) The reinstatement of the order of deaconesses. Even Pope Francis refereed to the issue recently. d) The common celebration of the Resurrection of Christ?

As I have already said, according to the schedule for the organization and work of the Holy and Great Council, no other topics and issues, apart from those unanimously approved and already included in the agenda, will not be put forward for discussion at the Council. At the assembly of First Hierarchs of the Orthodox Churches that took place in January of this year in Chambésy, the calendar issue was removed from the Council agenda, and the issue of reviving the institution of deaconesses was not even discussed within the framework of the pre-Conciliar process. Thus, these two topics will not be reviewed at the Council. Concerning the issues of second marriage for the clergy and a married episcopate, then, as we know, the already prepared and published draft of the Council document entitled ‘The Sacrament of Marriage and Obstacles To It’ does not provide for any reforms in this area. I will admit that some members of the Council may propose similar amendments when the document is discussed, but I am confident that these proposals, which would entail such important changes of the Church canons, will not be accepted by the majority of the Local Churches, including the Russian Church. I think that we should all remember that the aim of the Council is to strengthen Church unity and not to undermine it by proposing reforms which go against already established Church tradition.

– Has the issue been resolved between Antioch and Jerusalem over the jurisdiction of the Archdiocese of Qatar?

As far as I know, no positive resolution of this issue that is acceptable to both sides has yet been found. For this reason there remains the probability that the Church of Antioch will not participate in the work of the Holy and Great Council. I hope, however, that a resolution on the issue of Qatar that is mutually acceptable to both Churches will be found, allowing the Council to be held in a spirit of unanimity and love.

– Is the Patriarchate of Moscow contributing financially to the expenses of the Synod?

At the assembly of First Hierarchs of the Orthodox Church in Chambésy a decision was taken that the expenses incurred by the convening and holding of the Council are to be shared jointly by the Local Churches. Of course, the Moscow Patriarchate has not been left out of this matter. However, we have yet to receive any official information on the Council’s budget, of its articles and how they are to be fulfilled. These issues, which require pan-Orthodox discussion, at the present time are resolved without the participation of the Local Churches, of which we have several times expressed our consternation.

For the Moscow Patriarchate the Church of Constantinople is the Mother Church. For many centuries the Russian Church was part of the Patriarchate of Constantinople. This circumstance makes our Churches especially close to each other, and at present, in spite of the differences in views concerning certain issues, the mutual relationship between the Patriarchates of Moscow and Constantinople is at the highest level. This is witnessed by the fact in recent years there has arose a tradition of exchanging delegates for the name’s day celebrations of our First Hierarchs. I hope that the Holy and Great Council will enhance the development of fraternal co-operation and the strengthening of mutual relations between our Churches.

I Have Fought the Good Fight, I Have Completed the Race

Sermon on the Sunday before Theophany by Metropolitan Hilarion, Chairman of the Department for External Church Relations of the…

Homily on today's Gospel reading by Metropolitan Hilarion, Chairman of the Department for External Church Relations of the Moscow…