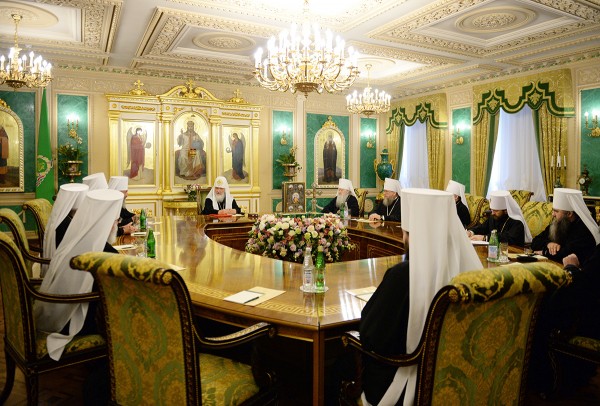 Moscow, June 6, Interfax – In connection with the decision of the Bulgarian Orthodox Church to boycott the Pan-Orthodox Council, the Holy Synod of the Moscow Patriarchate suggests to hold an extra-ordinary Pan-Orthodox Pre-Council Conference.

“Considering the great amount of work and the importance of problems raised, such a conference needs to be convened urgently, no later than on June 10, 2016, so that the on the basis of its resolution the Orthodox Churches could make a decision as to the possibility of convening the Pan-Orthodox Council at the stated date,” the participants in the Holy Synod, held on Friday in Moscow, write in its proceedings.

They also stated that the decision of the Holy Synod of the Bulgarian Orthodox Church to boycott the Council as well as the continued uncertainty with regard to the possibility for the Patriarchate of Antioch to attend the Council, just as the absence of a preliminary consensus on the draft Working Procedure of the Council and some if its documents mean that “there are serious problems that need urgent common Orthodox actions.”

The Synod noted that the non-participation of at least one of the Orthodox Churches in the Council constitutes an unsurmountable obstacle to the holding of a Council and stated that the number of Churches as well as Mount Athos monasteries, made essential amendments, which are to a great extent consonant with the proposals made by the Russian Orthodox Church and “need to be thoroughly examined with the aim to find a general Orthodox consensus.”

Certain groups in some Local Orthodox Churches also criticized the draft document of the Council, which regulates relations of the Orthodox Church with other Christian confessions. These groups found “ecumenism” in the document and insist that Catholics and Protestants are called heretics, not “Churches,” which split from the Orthodox Church as One and the Only True.

The Pan-Orthodox Council has not been convened for more than a thousand years and has been already prepared for more than half a century. All its decisions should be taken by consensus. Every local church has to send a delegation of 24 hierarchs, but each Church has one voice. Questions that were not previously agreed will not be put on the agenda and all the documents worked out in course of preparations to the council are published on the initiative of the Russian Church.

The participants in the Council should adopt the documents on following themes: the relations of the Orthodox Church with the rest of the Christian World, fast, marriage and church mission in today’s world, care for Orthodox believers in diaspora.