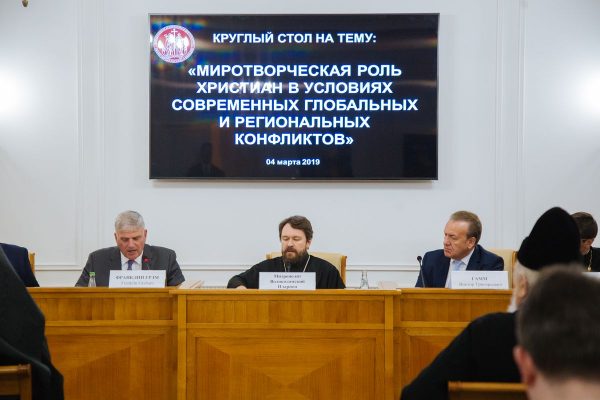 On March 4, 2019, a round-table conference took place at the Ss Cyril and Methodius Institute of Post-Graduate Studies (CMI) on Peace-making Role of Christians in the Global and Regions Conflicts Today, organized by the CMI and the Moscow Patriarchate department for external church relations (DECR).

Metropolitan Hilarion of Volokolamsk, DECR chairman and CMI rector, in his remarks, underscored the importance of peace-making service, ‘This mission is especially relevant in our days since the surrounding world is full of enmity and divisions’. Speaking about the work of Billy Graham, he described him as ‘as a striking example of cooperation between Christians in the Western world in the cause of peace-making and attempts to establish constructive relations with the USST’. He also noted that ‘the advocacy of the Gospel’s ideals of peace brings forth its good fruits today too’.

Speaking about today’s joint activity of Christians, His Eminence pointed to the projects for aid to persecuted Christians in the Middle East and Syrian children who suffered as a result of armed actions. ‘It is quite evident that today no country can on its own help restore Syria and resolve the situation in the Middle East’, he said speaking on the cooperation with, among others, the Billy Graham Evangelical Association. Therefore, the Moscow Patriarchate calls upon the world community and Christian confessions to unite their efforts for this work’.

Among other important projects is the support for Ukrainian refugees rendered together with the Association and the Samaritan’s Purse charity. His Eminence reported about the humanitarian, psychological and spiritual aid which has been given through common efforts to dozens of thousands of victims.

Rev. Franklin Graham, too, pointed to the importance of common peace-making work, saying that ‘we should pray that God may soften the hearts of the leaders of our countries. The world is very small and the key accent of peace is the Church. We should call upon people to reconcile with God’. In his opinion, the cooperation between Christian Churches, resulted, among other things, in the publication of the presented book and the realization of joint projects open up great opportunities for future initiatives.

‘We can attract attention to persecuted Christians’, Rev. Franklin Graham said. He expressed hope for further cooperation and pointed to the need to carry out a new conference that could help shed light on the problem of persecution.

The round-table conference was attended by representatives of various Christian confessions and state bodies. They pointed to its importance as a weighty contribution to the development of cooperation between Christians throughout the world. In particular, Metropolitan Niphon of Philippople, representative of the Orthodox Church of Antioch to the Moscow Patriarchate, thanked Rev. Franklin Graham for his remarks and recalled his meeting with Rev. Billy Graham in 1984.

After the round table the head of the DECR secretariat for inter-Christian relations, Hieromonk Stephan (Igumnov), stressed the importance of interaction between fraternal Churches and related the planned continuation of joint peace-making projects for the Middle East.

Most viewed articles
Patriarch Kirill: The Peoples of Russia and Ukraine Have No Interest in the Conflict138
Life Savers116
Metropolitan Hilarion of Eastern America and New York Reposes in the Lord104
Communion restored between the Serbian Orthodox Church and the Macedonian Orthodox Church – Ohrid Archbishopric104
Metropolitan Onuphry: One Needs to Search for the Truth in Spiritual Life, not Easy Ways85
Metropolitan Hilarion of Eastern America and New York to Be Buried in Jordanville on May 2272
What Do We Celebrate at Mid-Pentecost?69
Celebrating 100 Years with Paschal Joy55
Patriarch of Serbia to Concelebrate with Archbishop Stephen of Ohrid18
Most popular authors
Pravmir.com team520
Archpriest John Moses (+2019)116
Ioannis Foundoulis69
Priest Luke A. Veronis55
Maria Trushanina1