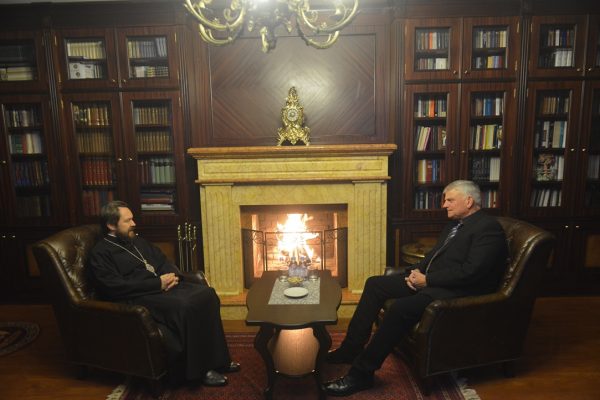 On 3 March 2019, at the residence of the Church of ‘Joy of All Who Sorrow’ Icon of the Mother of God in Bolshaya Ordynka Street, Moscow, Metropolitan Hilarion of Volokolamsk, chairman of the Moscow Patriarchate’s Department for External Church Relations, met with Mr. Franklin Graham, President of the Billy Graham Evangelistic Association, who had arrived in Moscow on a visit.

The participants in the meeting discussed various issues pertaining to the promotion of cooperation between the Russian Orthodox Church and the Billy Graham Evangelistic Association in the humanitarian sphere and in defending traditional moral values. For instance, the DECR chairman and the President of the Billy Graham Evangelistic Association noted the success of the World Summit in Defense of Persecuted Christians held in Washington, D.C., in 2017. The idea to organize the Summit emerged during Mr. Graham’s previous visit to Moscow in autumn 2015, at his meeting with Metropolitan Hilarion.