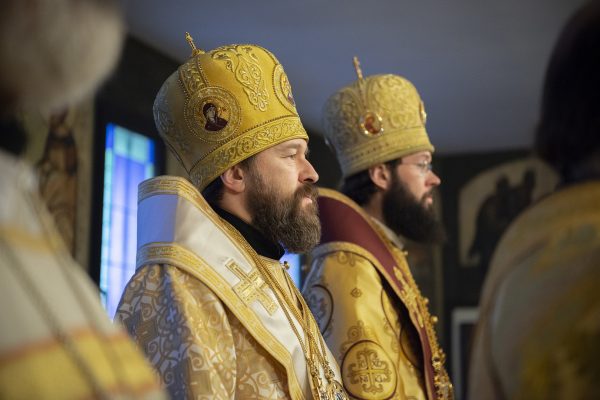 On February 12, 2022, the Day of the Synaxis of the Three Hierarchs: St. Basil the Great, St. Gregory the Theologian, and St. John Chrysostom, Metropolitan Hilarion of Volokolamsk, Chairman of the Department for External Church Relations (DECR) of the Moscow Patriarchate, and Metropolitan Anthony of Chersonesus, Patriarchal Exarch for Western Europe, celebrated the Divine Liturgy at the historical Metochion of the Holy Three Hierarchs of the Russian Orthodox Church’s Diocese of Chersonesus in Paris.

Among the concelebrants were Archpriest Nikolay Rebinder, rector of the cathedral, Archimandrite Philaret (Bulekov), DECR vice-chairman, Hieromonk Stephen (Igumnov), DECR secretary for inter-Christian relations, and the clergy of the Diocese of Chersonesus.

Present at the liturgy was a delegation of the Roman Catholic Church led by Cardinal Kurt Koch, President of the Pontifical Council for Promoting Christian Unity, who came to Paris to take part in the events devoted to the 6th anniversary of the Havana meeting between Pope Francis and His Holiness Patriarch Kirill of Moscow and All Russia.

After the liturgy, Metropolitan Anthony of Chersonesus and Western Europe warmly greeted Metropolitan Hilarion speaking about the special importance of the Metochion of the Holly Three Hierarchs in the history of the Russian Diaspora.

In his response, Metropolitan Hilarion congratulated the congregation on the patronal feast of the Metochion – the commemoration day of the holy hierarchs – St. Basil the Great, St. Gregory the Theologian, and St. John Chrysostom. “Each of them made a tremendous and decisive contribution to the course of defending the Orthodox doctrine. We glorify them today as saints who give us an example of how we, too, should respond to the challenges of our time, oppose schisms and false teachings and defend the Orthodox teaching”, the hierarch stressed.

Metropolitan Hilarion stated that the Church of the Three Holy Hierarchs in Parish is of special significance for the entire Russian diaspora:

“In the most difficult years when the Russian diaspora split into three jurisdictions, it is precisely here that faithfulness to the Moscow Patriarchate was preserved. Bishop Veniamin (Fedchenkov) was one of those few ones who defended the faithfulness to the Moscow Patriarchate in the 1930s, when it was said that “the Moscow Church – is ‘red’, ‘Bolshevist’, that Metropolitan Sergius (Stragorodsky) by signing his statement of loyalty to the Soviet power thus almost betrayed Christ and Orthodoxy.

“Today we can speak with joy about these divisions as events of the past, as something that has been overcome. We can speak of the fact that our inner unity is restored. However, we also know that the enemy of the human race, the enemy of the church unity is on the alert today too. Therefore, schisms exist today too, including in Ukraine and a division does exist today too, and today those who by their hostile actions towards the Russian Church seek to undermine her unity, to bereave her of her primordial parts, to take away her flock from the Russian Orthodox Church, her clergy and a part of her episcopate.

However, we can see that the Russian Orthodox Church, throughout the space where she is present, has preserved her unity, her readiness and her desire to defend this unity. We thank God for this unity which was restored, we hope, once and for all and for her strengthening today despite all the external challenges and problems we encounter”.

The DECR Chairman cordially thanked Metropolitan Anthony of Chersonesus and Western Europe for the opportunity to celebrate the Divine Liturgy together with him at the Church of Holy Three Hierarchs on its patronal feast.

He addressed the clergy and parishioners of the church with words of greeting and wishes “that we all could stand together in the church unity and firmly abide by the Orthodox faith”.

The DECR Chairman also addressed words of greeting to the representatives of the Roman Catholic Church who were present at the service.