Source: DECR
Natalya Mihailova | 20 April 2016
A scholarly conference, ‘The Pan-Orthodox Council: Opinions and Expectations,’ took place at St. Tikhon’s Orthodox University in Moscow on 19 April 2016 with the blessing of His Holiness Patriarch Kirill of Moscow and All Russia. 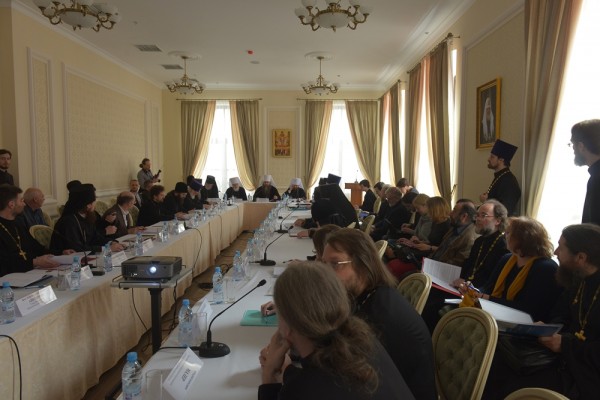 Taking part in the conference were many hierarchs, including Metropolitan Pavel of Minsk and Zaslavl, Patriarchal Exarch of All Belarus; Metropolitan Hilarion of Volokolamsk, chairman of the Moscow Patriarchate’s Department for External Church Relations; heads of other departments; superiors of the monasteries; rectors and professors of theological schools and public figures.

In his welcoming address Metropolitan Pavel noted that the majority of bishops and priests understood the importance of the Council and added that the task of the conference was to answer questions and elucidate the meaning of the Holy and Great Council of the Orthodox Church.

‘We have proposed from the very beginning of preparation to convene all bishops. Thus, the decisions taken by vote would have shown the opinion of the majority. However, we were told that it was impossible to bring so many bishops together and let it be the fixed number from each Church. At first it was twelve, later twenty, and finally twenty-four. It means that certain Churches will be represented by all its bishops, but our Church, which has over three hundred and fifty bishops, will be represented by a small quantity. That is why we insisted on the decision that a Local Church rather than each member of the delegation will have a vote, thus avoiding an impression of a pan-Orthodox consensus.

‘As to the documents discussed today at the conference, we would have liked to improve their wording. Believe me, we have exerted a lot of efforts to make the documents better than they were, but many our amendments have not been adopted. There will be an opportunity to present amendments to the documents, when His Holiness Patriarch Kirill will meet with other Primates before the Council.

After free discussion of all issues that were brought up the participants in the conference adopted a final resolution which will be presented to His Holiness Patriarch Kirill of Moscow and All Russia.

Most viewed articles
Life Truly Genuine and Authentic in the Eyes of God107
Patriarch Kirill: “We Should Pray for Our Lord to Strengthen Fraternal Feelings of the Peoples of Holy Rus”90
How to Deal with Sin75
Holy Cincture of the Theotokos to arrive in France next week56
The Authenticity of the Vision of Christ in the Life of Saint Silouan55
The Bulgarian Church Can Canonize Its First Patriarch47
“The models par excellence are the great hesychast saints,” says Romanian Orthodox Bishop of Oradea41
Most popular authors
Pravmir.com team136
Fr. Theodore Stylianopoulos107
Archpriest Basil Ross Aden75
Aurelian Iftimiu56
Archimandrite Zacharias Zacharou53
Ștefana Totorcea41