Metropolitan Hilarion completes his visit to the USA 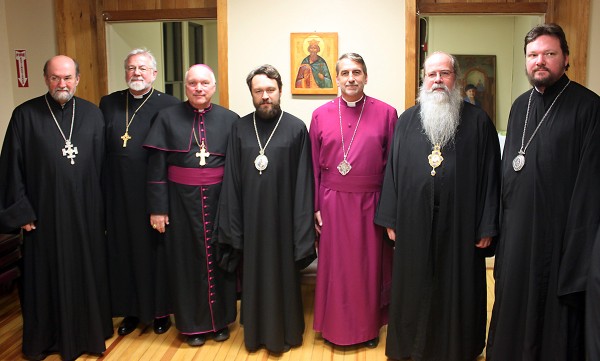 On November 8, the DECR chairman met at St Vladimir’s Orthodox Seminary with Dr. Foley Beach, Primate and Archbishop of the Anglican Church in North America.

Taking part in the meeting were His Beatitude Tikhon, Archbishop of Washington, Metropolitan of North America and Canada, Primate of the Orthodox Church in America; Bishop John of Naro-Fominsk, Administrator of the Moscow Patriarchate’s parishes in the USA; protopresbyter John Jillians, Chancellor of the Orthodox Church in America; archpriest John Behr, Dean of St Vladimir’s Seminary; archpriest Chad Hatfield, Chancellor of St Vladimir’s Seminary; and Bishops Ray Sutton and Kevin Allen of the Anglican Church in America.

The participants in the meeting discussed prospects of cooperation between the Russian Orthodox Church and the Anglican Church in America.

The Anglican Church in North America was established in 2009 and currently unites the dioceses and parishes who were dissatisfied with liberal teaching of their former churches. In 2006 several hierarchs of the U.S. Episcopal Church sent a letter to Metropolitan Kirill of Smolensk and Kaliningrad, chairman of the Moscow Patriarchate’s Department for External Church Relations (now Patriarch of Moscow and All Russia) and were assured in response that the Holy Synod of the Russian Orthodox Church was open for contacts and cooperation with those members of the U.S. Episcopal Church who are faithful to the Gospel moral teaching. On 25-26 October 2012, Metropolitan Hilarion visited Nashotah House Seminary (Wisconsin, USA). The Seminary, considered to be one of the most conservative theological schools in the Anglican tradition, was founded by active figures of the Oxford Movement, striving to restore the catholic tradition, in 1842. The Seminary has become the centre of the ‘High Church’ in the USA. The Holy Patriarch Tikhon of Moscow, while a bishop in the United States, used to visit Nashotah House Seminary. At the initiative of Bishop Grafton, he was awarded there a degree of Doctor honoris causa. The Seminary cherishes the memory of Patriarch Tikhon’s visits.

On November 9, Metropolitan Hilarion had a working dinner with Mr. Vitaly Churkin, Plenipotentiary Permanent Representative of the Russian Federation to the United Nations.

On November 10, the DECR chairman met with one of the leaders of the Evangelical Church in the USA, Mr. Timothy Keller, pastor of the Parish of Christ the Saviour.