Metropolitan Hilarion: Contradictions between the Orthodox Church and the Protestant communities that distort the doctrine to accommodate modern secular standards are intensifying

Source: DECR
Natalya Mihailova | 23 May 2016
In his address at the grand meeting on the occasion of the DECR 70th anniversary, Metropolitan Hilarion said that the relations of the Russian Church with the Catholic Church and with the Ancient Oriental Churches could be characterized by positive dynamics, but, regrettably, we cannot say the same about relations with the Protestant world. 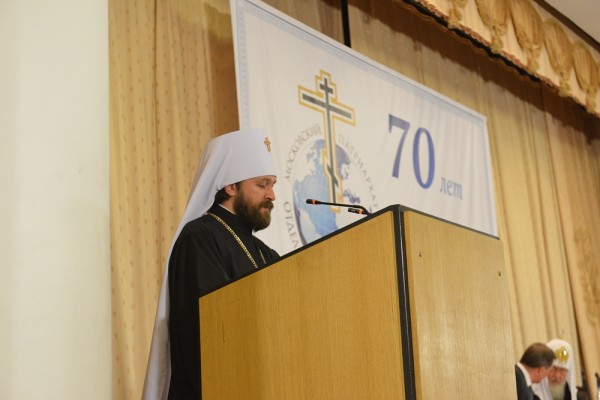 “The contradictions between the Orthodox Church and the Protestant communities that consistently distort the Church’s teaching to accommodate modern secular standards are intensifying,’ he said and added that the Moscow Patriarchate was still open to cooperation with representatives of the conservative circles of the Protestant world who remain faithful to the moral teaching of the Gospel and to traditions of the bilateral dialogue.

He named the Billy Graham Evangelistic Association as a partner. Relations with it are actively developing in education, defence of Christians and charity. ‘Humanitarian aid to the refugees from Ukraine last year gives a positive example.’