Metropolitan Hilarion delivers a lecture at University of Thessaloniki 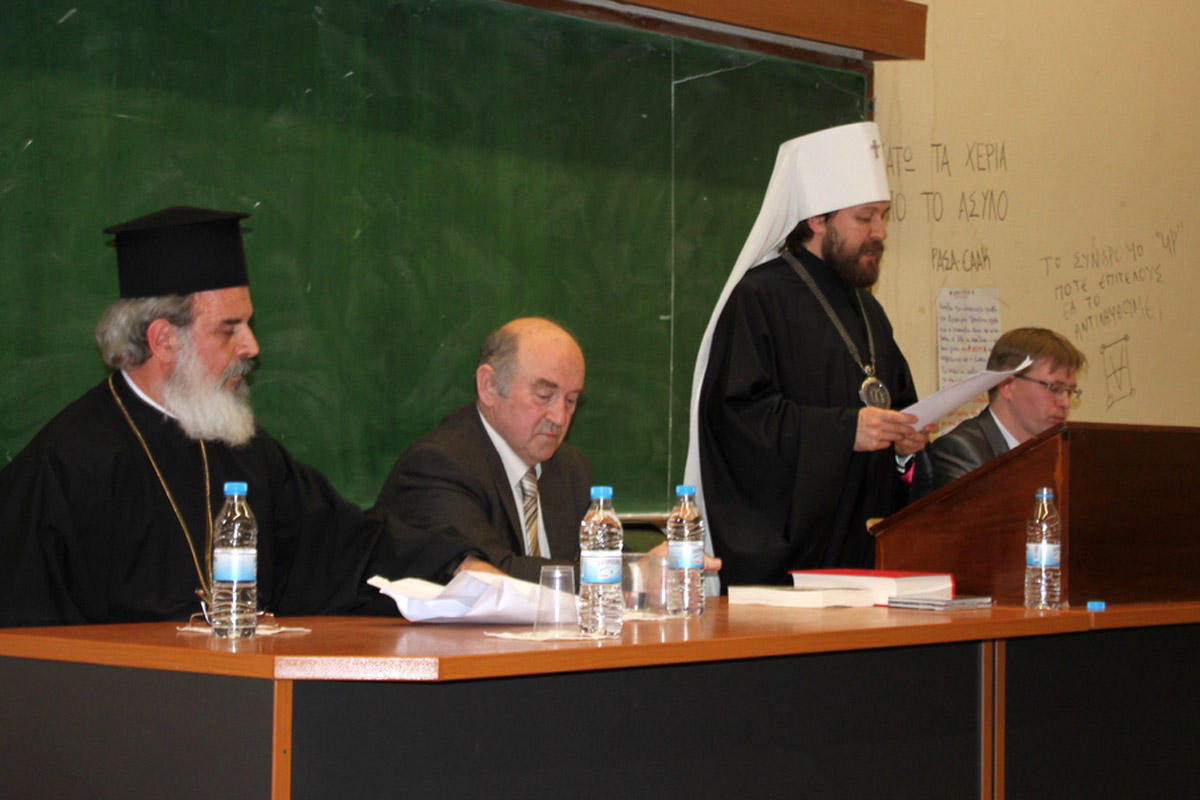 On April 16, 2013, Metropolitan Hilarion of Volokolamsk in his capacity of rector of the Ss Cyril and Methodius School of Post-Graduate and Doctoral Studies, while on a visit to Greece with the blessing of His Holiness Patriarch Kirill of Moscow and All Russia, visited the Aristotle University of Thessaloniki.

At the university main entrance, Metropolitan Hilarion was welcomed by rector Prof Yoannis Mylopoulos, pro-rector Despina Lioliou and dean of the Faculty of Theology Prof Michael Tritos. During a friendly talk, they discussed prospects for academic cooperation between the university and the ROC post-graduate school, especially the need to establish regular exchanges of students and doctoral candidates. They also considered a possibility for lectures to be given to the ROC post-graduate students by leading professors from the Faculty of Theology in Thessaloniki.

After the talk, Metropolitan Hilarion was taken to the university amphitheatre where professors and over 150 theological students had gathered. Prof Tritos introduced Metropolitan Hilarion to the audience, saying in particular, ‘With special joy we welcome to our faculty His Eminence Metropolitan Hilarion of Volokolamsk, chairman of the Moscow Patriarchate’s department for external church relations and rector of Ss Cyril and Methodius School of Post-Graduate and Doctoral Studies. His Eminence is a hierarch of the level of not only the Russian Orthodox but also the Universal Church. His special interests lie in the sphere of human rights and religious freedom. He is an expert in the Greek language, a friend of Greece and ardent proponent of peace, social justice and human rights’.

In his welcoming speech, the dean emphasized that ‘since the Russian people embraced Orthodoxy, they have showed amazing examples of faith and virtue. They produced great saints and great monastic ascetics, and the Russian Church carried out active missionary work in Alaska, Siberia and in remote Japan. The Russian people are known for their profound devotion rare in other nations’.

After the dean, Metropolitan Hilarion was welcomed by Prof. Archpriest Basil Kalyakmanis. Father Basil spoke about the metropolitan’s life and works, noting that ‘His Eminence is widely known in Greece. Particularly, last year in Athens and Thessaloniki, His Eminence presented the Greek version of Patriarch Kirill’s book ‘Freedom and Responsibility. That same year, the Orthodox music composed by His Eminence and compositions by the great Greek composer Mikis Theodorakis were performed at the amphitheatre over the Acropolis for the audience of over five thousand people’.

After the speeches, Metropolitan Hilarion read a lecture in Greek on Theological Education in the Russian Orthodox Church.

In conclusion of his lecture, Metropolitan Hilarion answered numerous questions from the audience, in particular, about MA course and Doctoral programs offered by the ROC post-graduate school, a possibility for young men and women to receive education in theology, church singing and iconography in higher education institutes of the Russian Orthodox Church. There were also questions about prospects for religious education in schools and about the history and the present situation of the Orthodox Church in China.

One of the questions concerned the miserable situation of Christians in Syria. ‘What is going on now in Syria’, the DECR chairman said, ‘is a full-scale humanitarian catastrophe. I keep in close contact with hierarchs of the Orthodox Church of Antioch, and they tell me that in the places taken over by rebellious groups, Christianity is exterminated to the last man. Christians are either driven out or eliminated physically. The very existence of Christianity in Syria is threatened. Regrettably, most of the Western politicians and mass media have ignored these glaring facts. The Russian Orthodox Church, on her part, is doing all that is possible to help Syrian Christians by regular supplies of humanitarian aid and attempts to persuade the world community that any support of the civil war in Syria is inadmissible’.

Metropolitan Hilarion gave special attention to students exchange between Russia and Greece. ‘The students exchange draws our Churches closer together. The psychological and linguistic barriers should be overcome. What other ways are there for us but vising each other and learning from each other? Indeed, Greek Orthodox students have something to see in the Russian Church, such as a vivid example of the revival of church life in our monasteries. For the last 25 years, the number of monasteries restored in Russia, Ukraine and other countries in the canonical territory of the Moscow Patriarchate has grown to reach almost 800, while they were only 21 in the Soviet time. In Western Europe today, many say that we live in a post-Christian era. But for our Church it is an era of church revival unprecedented in its scale’, he stressed.

On the same day, Metropolitan Hilarion visited the church of the Holy Spirit in the Prochoma village built by Russian sponsor I. Savvidi, a man of Greek origin.